EURUSD advances steadily to 1.1150 ahead of the Euro-zone inflation data, US ADP figures and the Fed’s interest rate statements. The following include technical analysis based on the Elliott wave theory.

July 31, 2019 | AtoZ Markets – The Euro-dollar currency pair has been quiet since the last ECB meeting. The price is recovering from 1.11 and was able to make 1.115 on Tuesday. Meanwhile, the London session is pushing prices below 1.115 but not significant yet. The Euro-zone inflation data coming soon might provide some moves before the bigger events later in the day. Depressing data may force the EURUSD to continue the bearish trend ahead of the Fed. There are no reversal signals yet. Perhaps today’s events will turn the tide.

EURUSD could spark back to life on Wednesday amid a series of high impact economic events. Starting from the Euro-zone inflation data coming soon to the mighty Fed’s rate decision coming later. The US ADP employment data is expected at 150k. We might see some deflection after the release of this data especially if the deviation is 50k or more. The Fed is expected to reduce the interest rate, as surprising as that might sound. The rate is expected to be reduced by 25 basis points to a target range of 2.00%-2.25%.

After many interest rate hikes since December 2015, the expected rate cut will be the first since December 2008. Projected rate forecasts for the rest of the year is more important than the actual release. EURUSD will start a bullish correction if the Fed is extremely dovish or tank toward 1.1 if extremely hawkish.

EURUSD is close to completing an important long term price pattern – an impulse wave since January 2018. The impulse wave is about to complete the 5th wave diagonal with the last leg currently playing out. The projected price reversal zone was set at 1.105-1.1025 as the chart below used in the last update shows. 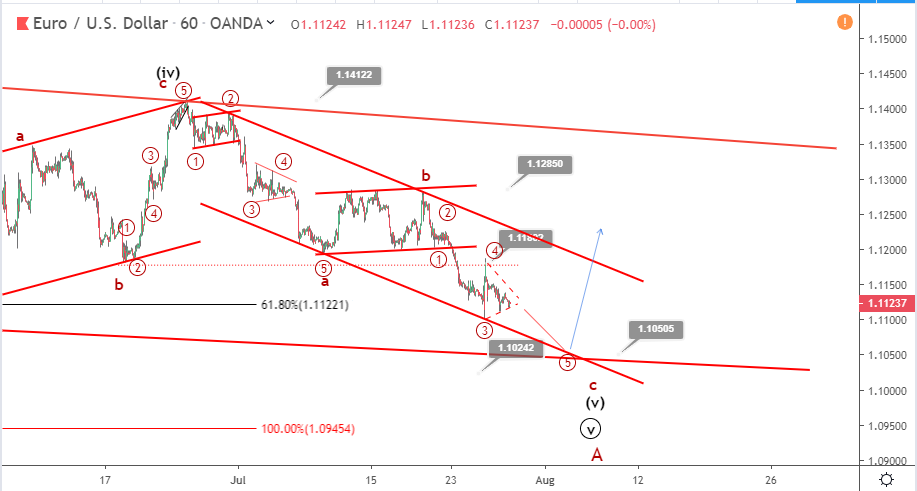 Wave 4 of c triangle extended further with a rally to 1.115. The new chart below shows a further dip to the 1.105 reversal level is still very much possible. 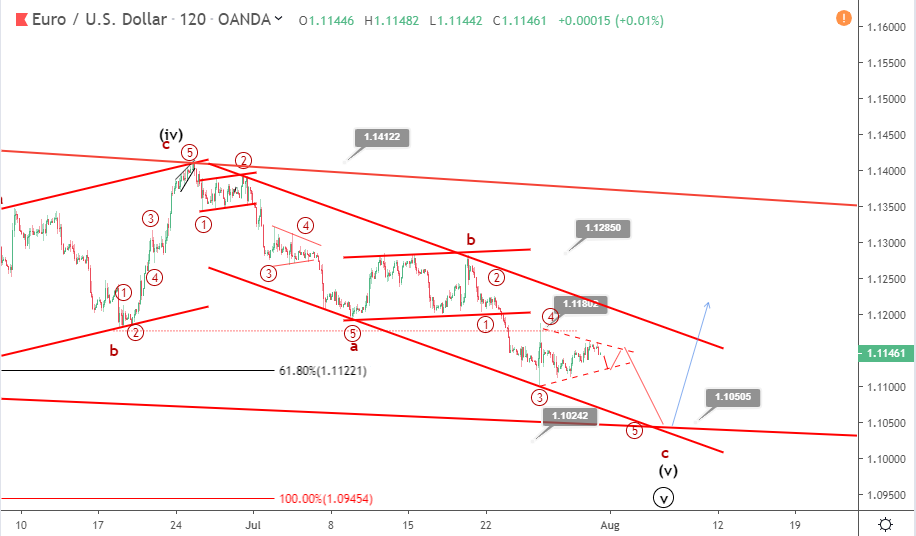 If this plays out as expected, price should rally afterwards above 1.1180 to signal the end of the 5th wave diagonal and the start of a 3-wave bullish correction toward 1.18-1.2. On the other hand, a fast dip below 1.10 might lead to the invalidation of this scenario.