Euro is approaching 1.14 after yesterday's Powell dovish comment. Will price continue higher as the market awaits ECB president's speech and the FOMC meeting? The following insight is based on Elliott wave theory.

November 29, 2018 | AtoZ Markets– EURUSD climbed above 1.13 and almost hit 1.14 after yesterday's Powell comment. The Fed chair, Powell, says rates in the U.S are close to a neutral. This comment triggered a Dollar sell-off that lasted to today's Asian session. EURUSD prior to the comment, was rebounding from 1.1270 after completing a 200-Pips drop since last week. ECB president speaks today in Frankfurt before the FOMC meeting. Will the Euro sustain this gain?

From Elliott wave perspective, EURUSD completed the year-long sell-off at 1.1215 with an impulse wave. The impulse wave was a 'textbook' one which ended with an ending diagonal before price surged quickly above 1.1450. According to the theory, an impulse wave is followed by a 3-wave correction in the opposite direction. By technical projection, the Euro rally should continue to 1.2. The major concern against the 1.12 expected rally is the corrective pattern that followed the move from 1.1215. When a correction starts with a 3-wave leg, it becomes open to many possibilities – a flat, triangle, double/triple zigzags or other complex corrective patterns. If the correction completes with a flat or triangle, it will be very well short of the 1.2 target. 1.2 target is achievable if a double or triple zigzag bullish correction emerges. As price moves, the picture will get clearer. But, while waiting for the higher time frame price pictures, we can always revel in the lower time frame (intraday) pictures. 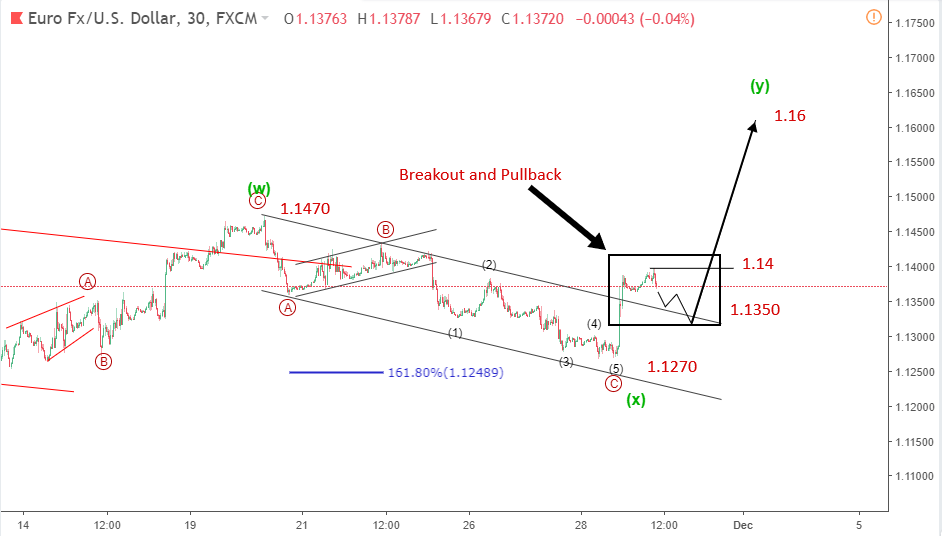 In the last update, we expected price to start a new move upside. The drop from 1.1470 to 1.1270 potentially completed the 2nd leg since the bullish correction started at 1.1215. The channel breakout near 1.14 is a good bullish sign. Price might correct close to 1.1350 before a break above 1.14 leading to 1.16. Unless a fast dip below 1.1270 happens, the medium-term direction still points upside.