July 25, 2019 | AtoZ Markets – EURUSD is falling for the 5th consecutive days as the bears push the currency pair down after below-par data from the Euro-zone. Price is now about entering into the 1.11-1.1115 support zone. A bullish reversal might be close but there is still room for more downside move.

The European Central Bank will hold its monetary policy meeting in Frankfurt later today. The Euro-zone economy is in turmoil and the ECB will be expected to cut rates to ease the pressure after it couldn’t meet up with its 2% inflation target. Recent data from Germany and the Euro-zone have not been good while the Brexit puzzle remains unsolved. Germany has also refused to tighten its fiscal policies. The US-China trade war and other political tensions have weighed heavily on growths. Central Banks have either left their rates unchanged or even cut them.

The ECB is expected to cut their interest rates today. The odd of a 10 basis point rate cut rose to 48% on Reuter. Often times, the rate decision is priced into the market thus it tends to be overshadowed by the ECB press conference. A more than expected dovish tone will set the EURUSD further downside. A big dip below 1.11 should happen while an unexpectedly hawkish tone could lead to a big recovery. If the price breaks above the falling channel, we should see a retest of 1.1285 in the short term.

EURUSD is about losing all of the 4-weeks gains between late May and late June. Price is about to enter into the 1.11-1.1115 support zone. The long term bearish impulse wave trend that started in January 2018 is still in motion with the 5th wave ending diagonal in the last leg. The ultimate bearish target remains at around the 1.105-1.1025 zone as revealed in the last update where the chart below was used. 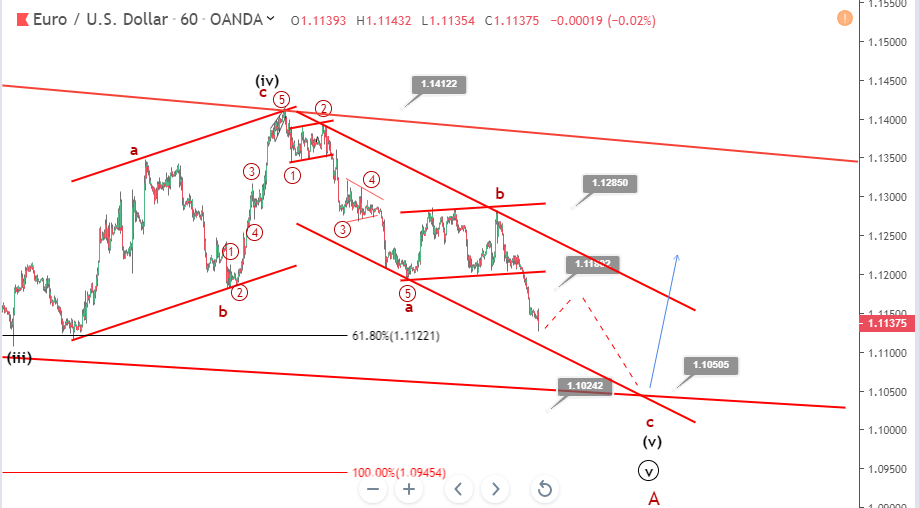 The last leg zigzag wave c of (v) is well-formed within a falling channel. In as much as price remains within it, the bears still rule. The new chart below shows a little change to the chart above. 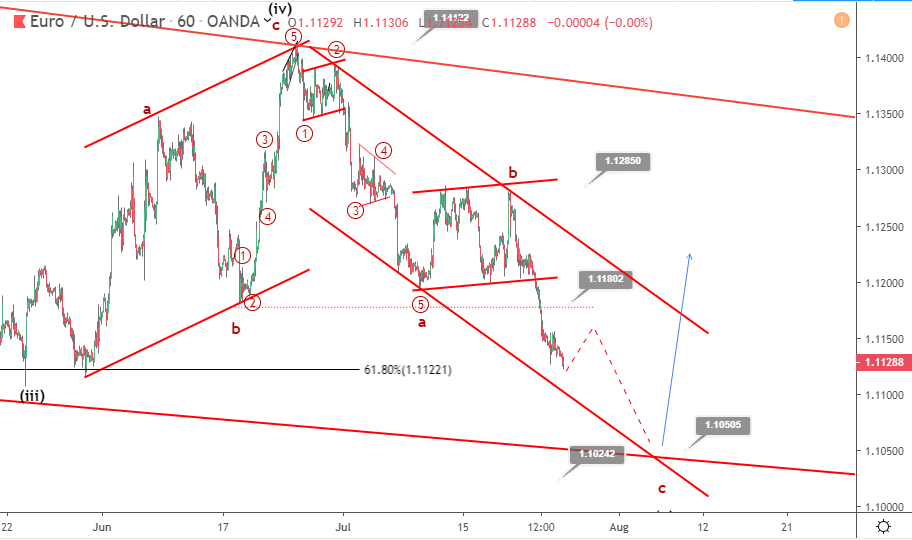 The price might bounce off the 1.11-1.1115 zone to test 1.118 before dropping further to 1.1050. A long term bullish reversal should happen afterwards. After the market settles from the ECB meeting, there will be more clarity.