Forecasts
Sep 11, 2019
Free Trading Account Your capital is at risk.

EURUSD remains within the 1.101 and 1.107 range with the market eyeing Thursday’s ECB meeting. Will there be a breakout of the extremes before the high-impact event?

September 11, 2019 | AtoZ Markets – Following the surge to 1.108 last week, EURUSD dropped to 1.1015 earlier this week and has remained in-between these two intraday levels. Tuesday was particularly quiet – the price stayed within a 30-pips range and unable to knock off 1.105 despite many attempts. Wednesday started similarly with no activities in the Asian session. However, sizeable move might be seen during the London session and the New York session with the US Crude Oil Inventory due to be announced. However, traders and investors will be much concerned about Thursday’s fundamental events which include the ECB meeting and the US Inflation data.

The market generally expects an easing policy from the ECB on Thursday which would of course drag the Euro further downside. However, the latest hints suggest there might be rate cuts rather than any quantitative easing policy. If the ECB fails to meet the expectation for easing, the higher risk factor favours the bulls. There might be a temporary bullish spike toward 1.11 and if followed by more hawkish than expected comments, EURUSD should continue the bullish correction toward the 1.1165 resistance level. On the other hand, growth concern might kick in and offset the bullish run. If ECB statements are very dovish especially with inflation and growth forecasts, the price should afterwards drop fast to 1.1 and perhaps below.

Meanwhile, at the start of the ECB press conference, the US CPI and Core CPI data will be released. The market expects lower inflation in August. Any big surprise might be swallowed by the ECB effects. EURUSD will most probably be the most volatile currency pair on Thursday.

From the perspective of the Elliott wave theory, EURUSD might have completed the long term bearish trend at 1.092. A bullish correction toward 1.18-1.21 should follow. The first rally to 1.108 was meant to complete the first wave (wave i) of the first leg of the bullish correction. Wave ii was expected toward 1.1 as the chart below, used in the last update, shows. 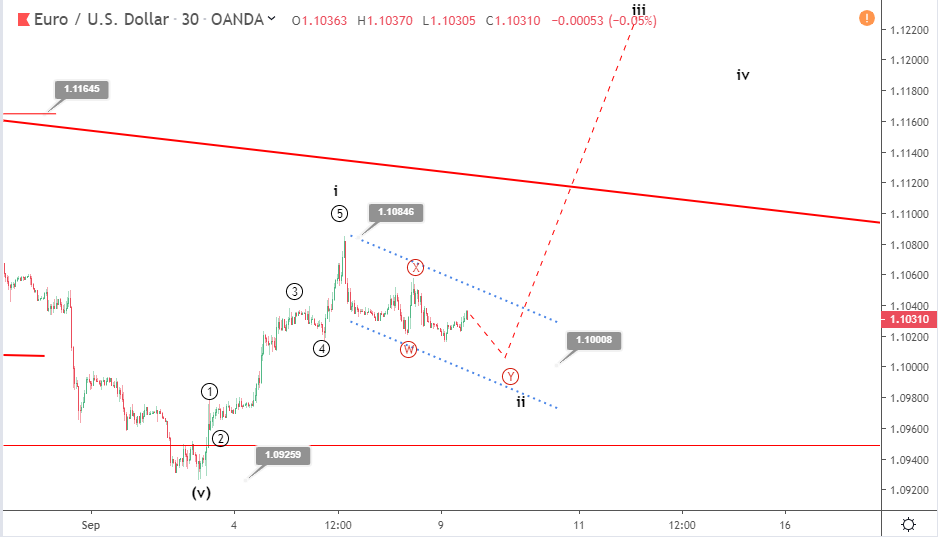 However, it seems wave ii is getting more complex as the price stays longer in the sideways than expected in the chart above. The new chart below is similarly expecting a dip below 1.1015. 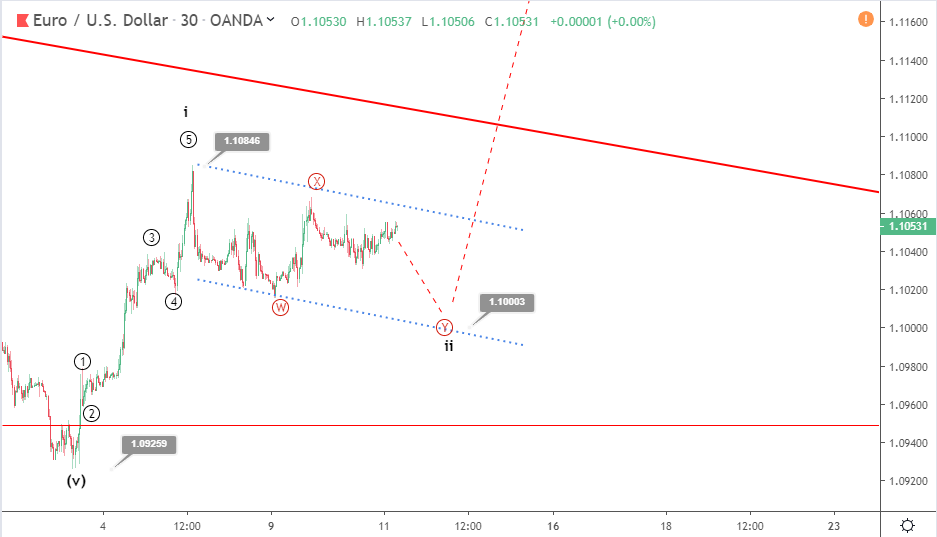 Wave ii might still extend toward 1.1 before wave ii surges above 1.1085. If the price breaks above the long term thick trendline, the bullish correction should continue above 1.12. A dip below 1.092 will invalidate this scenario. Price movement is expected to be heavily influenced by Thursday’s ECB meeting and USD inflation data.

Tags ECB policy rate Elliott wave analysis EURUSD analysis
Disclaimer: The views and opinions expressed in this article are solely those of the author and do not reflect the official policy or position of AtoZ Markets.com, nor should they be attributed to AtoZMarkets.