EURUSD started upside to continue the week's bullish run from 1.1215. Market looks forward to the Eurozone inflation data after Draghi's speech in the Frankfurt conference.

European central bank president, Mario Draghi, is about to speak at the Frankfurt European banking conference in Frankfurt today. EURUSD, meanwhile, has maintained this week bullish run from 1.1215 to trade at 1.1350-55 intraday resistance after yesterday's fast dip to 1.13. October Eurozone inflation data due to be released today is expected to be increased by 2.2% y/y.

The year-long bearish trend paused again after price failed to bridge below 1.12 handle and bounced back above 1.13. This happened after price completed an ending diagonal pattern which was expected to be followed by at least a 3-wave correction upside. In the last update, we looked at intraday wave analysis, let's look at the big picture again. 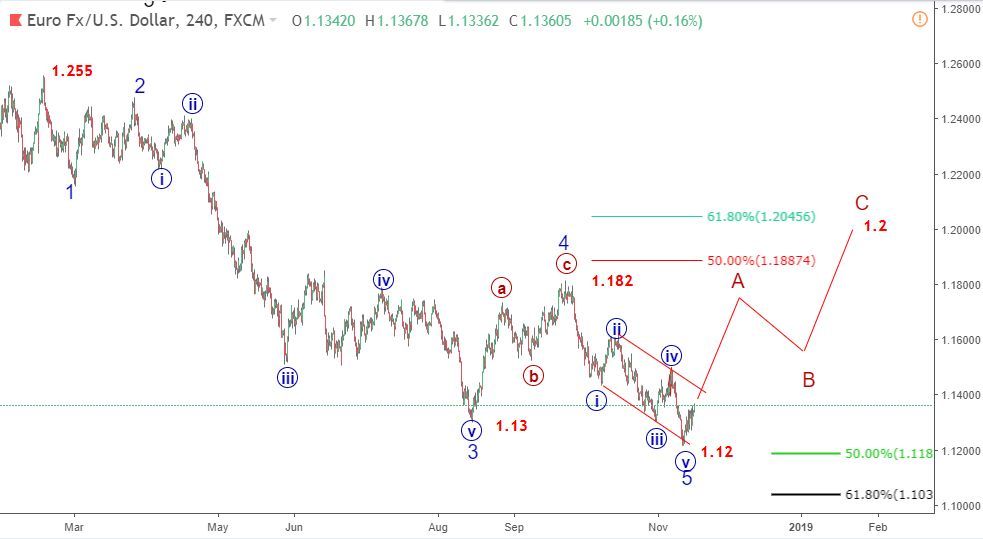 The chart above shows why the year-long impulse wave might have ended already just above 1.12 with an ending diagonal 5th wave. According to Elliott wave theory, a 3-wave correction should follow in the other direction. Going by this, a 3-wave correction should follow up into the first quarter of 2019. The current rally should break above the upper-line of the 5th wave diagonal up to 1.162-1.182. The ultimate upside target is 1.2. Price might even hit above it. There is an alternative scenario which shows the dip from 1.182 to 1.12 might be the 1st sub-wave of the 5th wave. This alternate scenario is less likely. The 3rd wave is already extended thus the 5th wave has a very small chance of extending. The scenario above is very much likely to happen. But, it's also good to look at the alternative to have the complete capture. 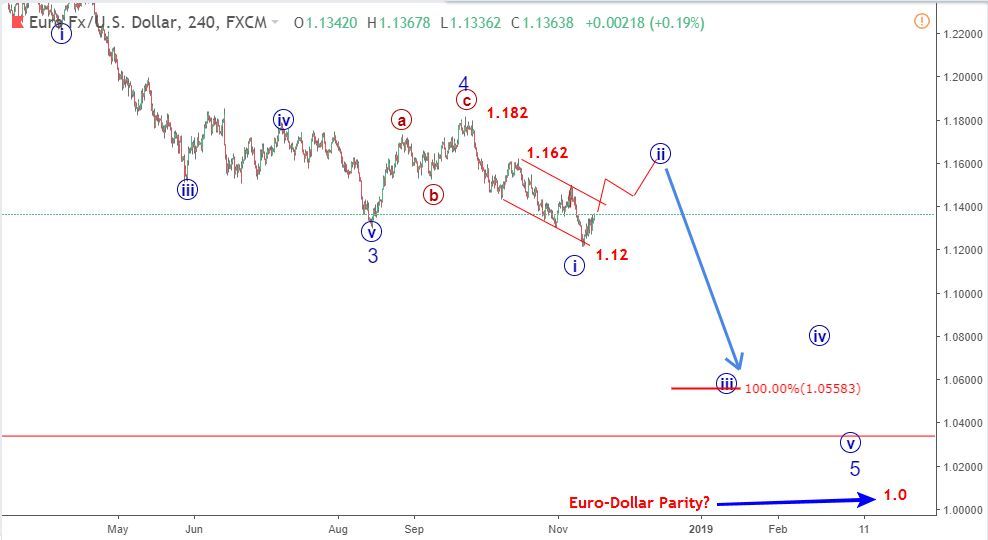 The alternative above forecasts Euro close at par with the Dollar. From Elliott wave perspective, this is is very much less likely than the first scenario. There might still be a Euro-dollar parity resulting from the 1st scenario as well, if the current rally ends with a 3-wave correction to 1.2 (as expected) and price continues downside. All these are forecasts into December 2018 to 2019 Q1. Currently the rally holds above 1.13 is expected to hit 1.15 if 1.12 stays unbroken.