EURUSD spiked above 1.14 on Wednesday after Fed’s dovish comments. The following looks at the technical side based on Elliott wave theory.

March 21, 2019. | AtoZ Markets – The U.S Federal Reserves surprised the market yesterday after its dovish outlook on the interest rates. The rates remained unchanged but the market’s expectation of a 2019 rates hike was torn as the US Central Bank signaled that no hikes will happen in 2019.  Toward the end of 2018, the bank forecast two rate hikes in 2019. The recent rates decision by the bank was also followed by cuts in employment, inflation and growth forecasts.

The USD quickly crashed across the board. EURUSD quickly hit above 1.14 to record its highest price since early February. However, the rally was limited below 1.145 as the currency pair is now retreating below 1.14 and now close to the pre-FOMC price levels.

Before the Wednesday’s FOMC meeting, EURUSD was on a bullish run from 1.1175 but around an intraday resistance zone at 1.1350-1.1375. Price had completed a diagonal pattern which could serve as a leading diagonal or an ending diagonal. The extent of the rally from 1.1175 will have a lot to say in determining which of the diagonal types is more favored by price.

We identified a diagonal pattern completed at 1.117 and have followed how price has advanced in the past updates. The rally was expected to be a 3-wave correction if the diagonal is leading which means that the bearish trend will continue. If ending, the bearish trend will be assumed to have ended and a much bigger bullish push up to 1.18-1.2 should follow. In the last update, where we used the chart below, wave a of the correction was expected to be close to completing and a 3-wave dip to follow. 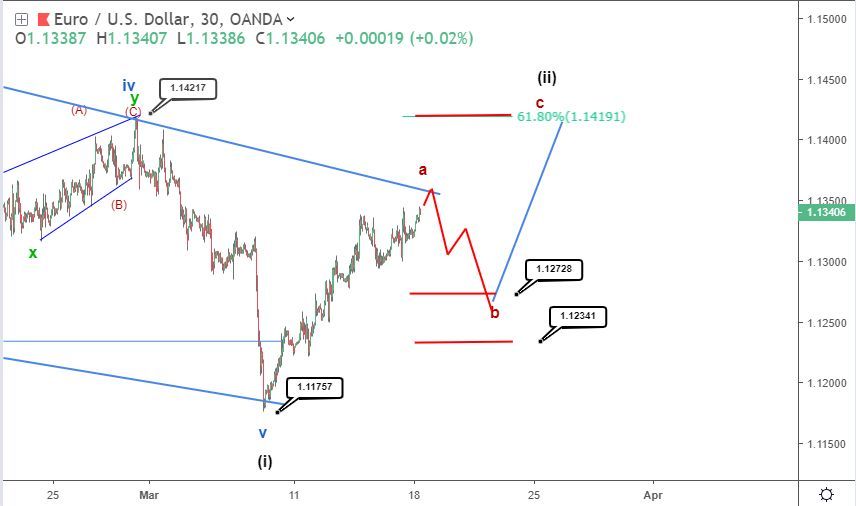 The dip didn’t happen prior the FOMC meeting. The Fed’s comment triggered more rallies instead and therefore altered our wave count to what the chart below shows. 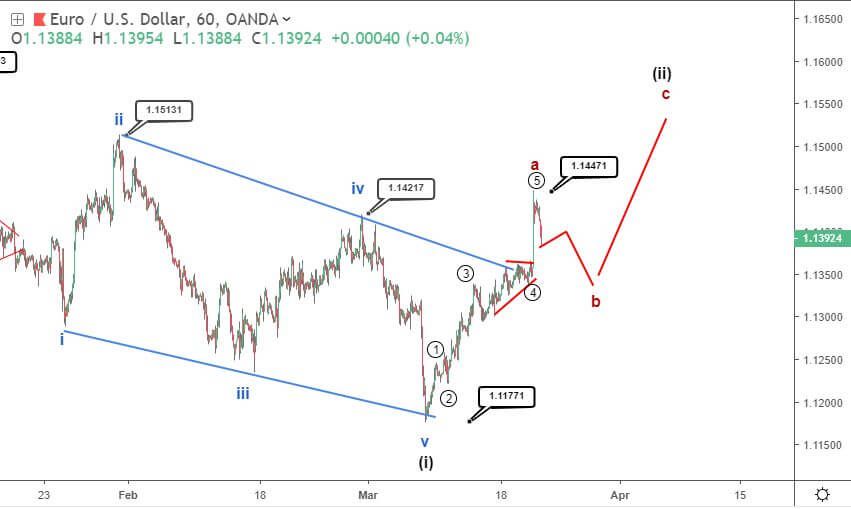 The current dip might continue to 1.13 intraday psychology level before another rally to 1.15 or beyond. EURUSD is back between 1.13 and 1.15 where it spent most of its time since the last quarter of 2018. The long term trend is still bearish but how far this current bounce goes will determine whether the bearish trend will resume or it has ended for a much bigger bullish correction. A break above 1.157 resistance will set the price all-bullish. Until then, the bear could resume after the current bullish correction ends.

Tags Elliott wave analysis EURUSD technical analysis Post-FOMC
Forex Crypto
Top 5 Forex Brokers
Top 5 Crypto Exchanges
Your subscription could not be saved. Please try again.
Thank you for subscribing. You will be the first to receive all the latest news, updates, and exclusive advice from the AtoZ Markets experts.
Everyone is reading
Top 5 Forex MT5 Indicators for 2021 you should try
Top 5 Cryptos to Watch in Quarter 2 2021
Bitcoin Facing Resistance Around $60,000 Event Area - What Next?
close ×