July 8, 2019 | SQUARED DIRECT – The Euro dropped on Friday after German Factory orders plunged 8.6% Year-on-year in May, the biggest slide in almost a decade, reflecting the negative impact of the trade tensions on the Euro zone’s biggest economy.

On the other hand, the greenback got boosted after the US created more jobs than it expected, which in turn diminished the probability of the Fed to cut rates in July’s meeting. Today, Germany will publish its Industrial Production figures, a weaker than expected data will add even more pressure on the Single currency.

The Euro broke below a major support level on Friday, 1.1250, which is also the 200-day moving average and the rising trend line since the beginning of June.

A retest of the recently broken support might be in play today, after that the Single currency will likely roll over and test the recent lows once again. The pressure will remain on the bulls as long as the price is trading below 1.1250. The pair is likely to resume the downward trend to test levels below the 1.1200 support. 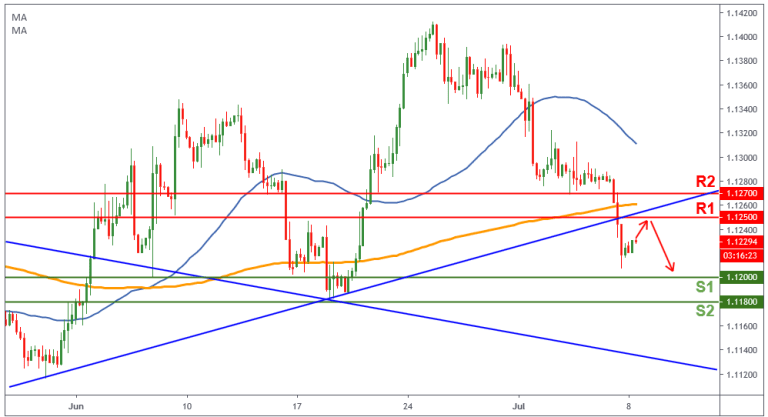 Tags Euro EURUSD technical analysis Forex analysis US dollar
Forex Crypto
Top 5 Forex Brokers
Top 5 Crypto Exchanges
Your subscription could not be saved. Please try again.
Thank you for subscribing. You will be the first to receive all the latest news, updates, and exclusive advice from the AtoZ Markets experts.
Everyone is reading
Is Forex Trading Halal or Haram in Islam?
Top 5 Forex MT5 Indicators for 2021 you should try
Top 5 cryptocurrencies 2021 | Best Cryptocurrency To Invest
close ×