Eurozone flash PMI signals strong expansion in February, moving up a gear. Despite, the concerning EU political events in 2017, will the growth lift even higher in the coming months on new orders?

28 February, Orbex – The modest pace of economic recovery in the Eurozone continued to chug along in the second month of this year, despite uncertainty from the political side of the spectrum continue to loom which could potentially plunge the region into further chaos.

Eurozone composite PMI came in as a surprise

Preliminary data from IHS Markit, released on Tuesday last week showed that the Purchase manager’s index for the eurozone’s manufacturing and services sector rose to 56.0 in February, up from 54.3 in January and was the highest level on record since April 2011. The Eurozone flash PMI signals strong expansion, which came in as a surprise. 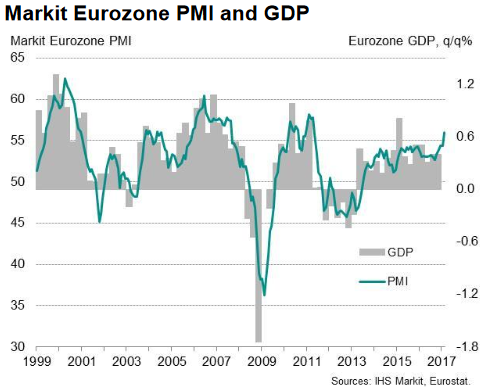 The recovery in the Eurozone, if confirmed by the final estimates could signal a second month of strong expansion in the sectors. The new orders data was also positive showing that business activity could continue to expand over the coming months. New orders increased at the fastest pace in six years according to the preliminary release with businesses seen hiring additional workers to meet the demand. The pace of hiring also set a record, rising to the highest pace since August 2007.

Commenting on the release, Chris Williamson from IHS Markit said that the economic momentum in the eurozone “moved up a gear” in February and was optimistic that growth could even lift higher in the coming months on new orders.

In terms of the impact from the PMI readings on the GDP, the IHS Markit’s chief economist expects the eurozone’s quarterly economic growth to reach 0.6%. If confirmed, this could potentially see a 0.4% rate of expansion recorded from the third and fourth quarters of 2016.

Playing catch up to Germany, France was also contributing to the composite PMI increases. In France, the composite PMI rose to the highest level since May 2011, in what looks to be a gradual improvement in the economy. Front runners in the election, Emmanuel Macron, and Marine Le Pen have been building their campaign base rejecting President Hollande’s economic policies which have failed to create jobs or growth for the region.

Macron’s contender, Marine Le Pen who is running neck to neck brings more radical changes to the campaign. Including promising to hold a referendum to pull France out of the EU. But, also to abandon the EU’s fiscal discipline. Francois Fillon, who hasn’t been entirely written off from the election campaign, is the conservative candidate. Who plans to implement deep austerity measures by increasing taxes for consumers and cutting taxes for businesses.

While the candidate’s promises do bring a lot of uncertainty. French businesses seem not to be concerned much. Unlike the French bond markets, which have seen investors cutting exposure pushing yields higher on increased uncertainty. On top of this, businesses were also seen increasing prices at the fastest pace in over 5 years. Which is also a positive sign for the ECB as the data points to continued inflationary pressures. The ECB has struggled to push inflation towards its 2% goal for the past four years.

Despite the positive developments in the Eurozone’s economy, many are still skeptical about the current trends. The ECB, for one, has signaled that policy makers were not in a rush to cut back QE purchases. The central bank also brushed off the recent rise in inflation citing that core inflation remained stuck at 0.9%. Moreover, some experts also believe that the Eurozone would not be able to sustain the current pace of growth especially as it faces regional elections, Brexit and the U.S.’s protectionist policies all of which could post strong headwinds for growth.