The Europol has recently arrested six hackers against the background of a $27 million stealth in a cryptocurrency hack.

26 June, 2019 | AtoZ Markets – The Europol conducted the arrest of six hackers in coordination with the United Kingdom’s South West Regional Cyber Crime Unit, the Dutch police, Eurojust, and the U.K.’s National Crime Agency (NCA), as per the press release that took place on June 25.

The attackers arrested were involved in what is called “typosquatting,” which is identified as a fraudulent method of stealing the credentials of users.

The malicious hacking means it depends on creating a scam website with a similar name to the authentic one. And that is where the method takes the word “typo.” In how it is Typosquatting. So once users log in to the fake website.

The scam website records the credentials of users once they provide them in the login fields. And in return, the hackers will have gained access to the user accounts in question.

Cryptocurrency hackers depend on typosquatting most

The press release mentioned as well that Europol arrest hackers. And it believes that the hackers were able to use “typosquatting” to steal login details. That enabled them to gain access to clientele wallets. And what they include funds. The hackers believed to have this scheme to steal at least 4,000 bitcoin (BTC) from many users in 12 different countries.

The six individuals were distributed between the UK and the Netherlands, as per the report. Specific internet browsers have exploited significantly in the last period of time. Firefox, the well-known internet browser, reported to have worked on blocking a malicious script dedicated to cryptocurrency mining malware, late last year.

The update process was said to have implemented an automated method to block such kind of malicious script. However, the corporation decided to enhance the overall user experience. Incidents of hacking cryptocurrency exchanges, along with users’ accounts on such exchanges have been in the headlines more recently.

In the latest news in that regard, AtoZ Markets reported recently that the Israeli authorities managed to arrest two Israeli brothers over charges of hacking the well-known cryptocurrency exchange Bitfinex. That occurred at the beginning of the current month.

Both of Eli Gigi and his younger brother Assaf Gigi said to have stolen millions of dollars worth in cryptocurrency. That was depending on creating “credential-stealing clones” of prominent cryptocurrency exchanges and wallets.

Typosquatting is a method of scam hackers. It is usually resorting to, to gain access to user accounts of variant natures over the internet. The hoax depends on visual tricks. And hence, the technical method includes the word “typo” in it.

Hackers target a website that requires visitors to create user accounts to use it. Here, the nature of the site should be mostly financial. It is for the hackers to care for, where it stores passwords for bank accounts, or even built-in wallets, in the case of cryptocurrency, especially for instance.

It is rather easy for victims to fall in such kind of hoaxes. Since once the fake website is up, it will look identical to the authentic ones. Hackers also care about other added details like the look of the website and others of the contact details and address.

The mechanism of those fake websites work as the following:

The good news here is there is always a trusted way to rely on when it comes to inspecting whether a website is authentic, genuine, and dependable or not. At the address bar of the web browser in use to surf the internet, any user can view whether the website is safe or not.

In the case of AtoZ Markets for example, if you navigate to the address bar of the web browser, and click on the sign of the padlock, you will get a piece of information that relieves you, telling you that you are between safe hands, as the photo below shows. 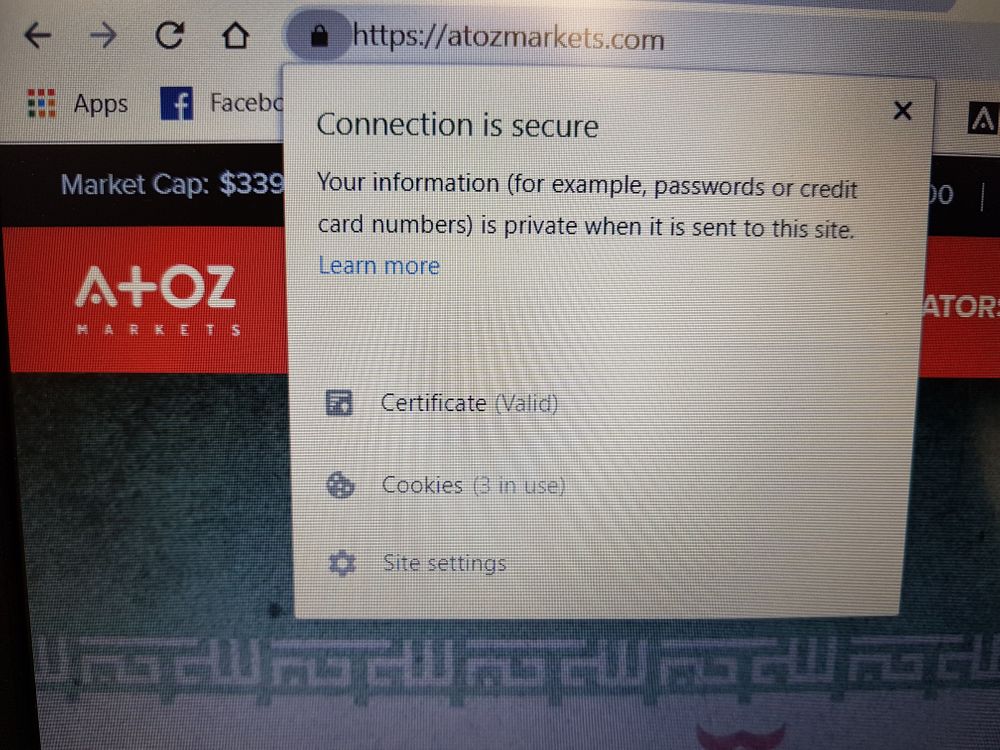 Other factors one should check for when visiting websites. Especially that involve financial dealings are whether the site uses the HTTPS and has an SSL certificate or not. AtoZ Markets cover both and more security features that guarantee to the user. We do not store any credentials of user names or passwords. Also, we do not store even the registration process with email addresses that are encrypted. We highly urge our readers to keep their eyes open when they visit any other websites. And always check the above-mentioned points.