July 17, 2019 | AtoZ Markets – The lead of the Libra David Marcus has recently testified before the US Senate Banking Committee in order to answer the most relevant questions regarding upcoming Facebook stablecoin. At the same time, the German finance minister Olaf Scholz has raised concerns about consumer protection and the potential disruption in the eurozone against the background of Facebook Libra launch. Are the EU and US afraid of Libra? Atoz Markets tried to find the answer.

The tension on the Capitol Hill is growing, should we blame Facebook Libra?

This Tuesday David Marcus, who is also the head of the Facebook Blockchain division met with the US Senate Banking Committee to discuss Libra stablecoin project. With the Senate hearing done, Marcus will sit before the US Financial Services Committee. The crypto community believes, however, that the Libra project lead might have to stay in Washington D.C. for a little bit longer.

Notable, that senators from, usually warring parties of Republicans and Democrats, both unified with pressing questions about the privacy, security, and global concerns associated with Libra.

The US politicians compared the social media giant’s plan of entering the industry of financial services to a toddler burning the house down.

The US Senators address the main Facebook Libra issues

The Senators at Tuesday’s hearing were questioning the company’s official David Marcus,  about Facebook anti-money- laundering policy, how the social media giant consumers’ data and funds will be protected.

Sherrod Brown, a Senator-Democrat, during the hearing, said, that it “would be crazy” to give Facebook a chance “to experiment with people’s bank accounts.”

Brown believes it would be “delusional” to think individuals would trust the social media company with their “hard-earned” money.

According to the Democrats official, the business model of Facebook  is to ‘intensify hate’ by the dichotomy of connecting people and making a buck..”

Along with the aforementioned remarks, there were genuine concerns that the wide reach of the social media giant, coupled with its entry into the payments realm via a digital asset, would be a sovereign problem.

Since Facebook unveiled its stablecoin plan, critics have lined up to voice skepticism, including US President Donald Trump.

The Senators were visibly angry about last year’s Facebook’s privacy issues. The concept of cryptocurrencies coupled with a private company of Facebook’s reputation has made the politicians even more displeased.

Senator Thom Tillis said that digital assets are still in the “wild wild west” phase due to a lack of regulations, while still maintaining that Libra could be a “good idea for us to explore.”

Republican Senator Martha McSally said that she “does not trust” Facebook. She pointed out the fact “instead of cleaning up the house” the social media giant is “launching into a new business model.”

Certain Senators, however,  including Senator Pat Toomey and Senator Mark Warner lauded the idea of the blockchain-based payment system, adding that the regulatory backlash against Facebook and Project Libra was a bit “premature” and “misguided,” to some extent.

On Monday, US Treasury Secretary Steven Mnuchin said he was “uncomfortable” with Libra. In addition, last week the head of the US Federal Reserve, Jerome Powell, noted that many serious concerns regarding privacy, money laundering, consumer protection, and financial stability, should be thoroughly and publicly addressed before proceeding with the Facebook project.

“We know we need to take the time to get this right,” said David Marcus, who is also the former head of PayPal.

Earlier, in the official note addressed to the crypto community, Marcus has already outlined, that Facebook won’t have any special responsibility for the Libra Network and would not have access to any financial data from the wallet provider.

During the hearing, Libra’s lead stressed, that the Libra Association – the independent authority responsible for managing the currency – will only share customer data with Facebook and external third parties if it has consented, or in “limited cases”, where it is necessary.

Throughout the accusations, Marcus added that Facebook would work with any governing body, both at home and overseas, to ensure that everything is by the book. Libra will not see the light of day unless the “regulatory concerns” are addressed, stated Marcus after the hearing. His post-hearing tweets read : 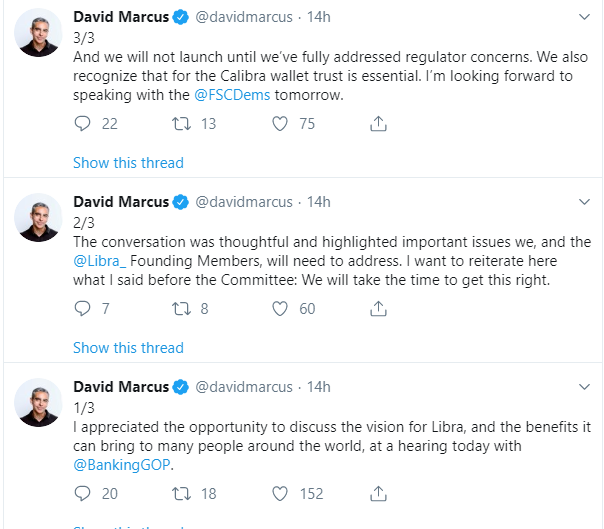 Against the background of continuing tensions in Washington over Facebook Libra, it is worth to mention the recent statements of the EU authorities regarding the new stablecoin. Following other public officials footsteps, German finance minister Olaf Scholz has addressed regulators to examine Libra project.

Scholz reportedly raised concerns about consumer protection and the potential disruption in the EU, calling the Euro “the only legal means of payment in the euro area.”

Scholz believes, that the introduction of widely-accessible digital assets may interfere with states’ ability to manage their economies through monetary policy.

He alluded to efforts underway by German authorities and their allies to “ensure financial stability, consumer protection and the prevention of entry-gates for money laundering and terrorist financing,” as media reports.