The much awaited Ethereum Constantinople and St. Petersburg hard fork have been projected to happen tomorrow. The following Ethereum technical analysis give some insights.

February 27, 2019| AtoZ Markets – The Ethereum Constantinople hard fork was postponed more than once last year. Ethereum have a plan in place to make sure all miners on their network migrate to the new POS block system. To make this happen, a 'difficulty bomb' feature would be introduced to increase mining difficulty. But extending this for another 12 months is going to be one of the main focus of tomorrow's hard fork projected to be mined on the 7,280,000th block. To make up for the delay of the difficulty bomb, Ethereum will adjust their mining reward system from 3 ETh to 2 ETh. This hard fork thereby probabaly might not cause a big change in the price of Ethereum. It mshould also be noted that the upgrade might be delayed one or two days from 28th February as an official blog post reveals. Ahead of the hard fork, what are the technicals projecting?

How has Ethereum price moved ahead of the hard fork?

Ahead of this upgrade, there has been mixed expectations from crypto industry experts and analysts. We quoted some of them in one of our recent reports at AtoZ Markets. Some believed the price of Ethereum would spike up while others have the opinion that the recent bullish run would suffer a big blow. Ethereum and other cryptocurrencies have been on the rise this month, offsetting January losses. The second largest crypto on coinmarketcap gained 68% in less than three weeks this month after is rallied from $100 and hit $170 last week. However, the market has been under a heavy bearish pressure as the bullish run melts away. Some have attached Friday's crash to the negative comments from Warren Buffets regarding Bitcoin and cryptocurrencies. Furthermore, as of today Ethereum market cap has dropped to $14.6 billion after it almost hit $17 billion last week. Trading volume has also dropped to $3.86 billion from last week high of almost $6 billion.

The last week upsurge saw Ethereum briefly hit above January high of $161. We had, in the last Ethereum technical forecast, expected price to hit $190-200 this month. In the last update where the chart below was used, price was making a bullish move from $100 after the bearish correction in January ended. 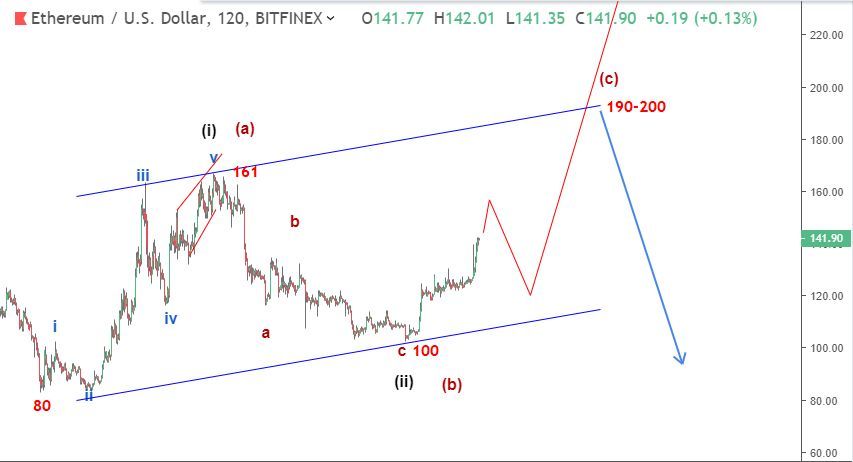 The chart above interpretes two scenarios – a bullish correction to $190-200 followed by a new move downside to a new low or a bullish impulse wave breakout upside to $350 or higher. The chart below shows how price has moved since this update. 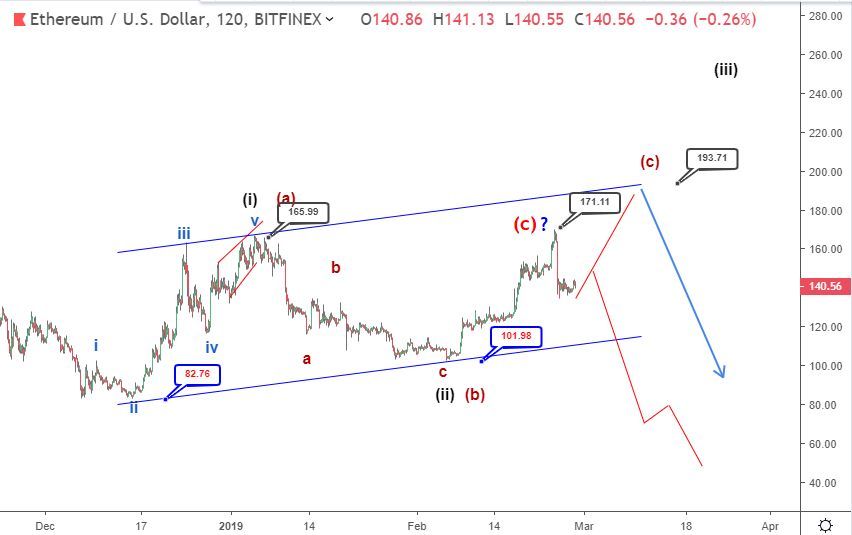 Ethereum is still under heavy bearish pressure despite the gains seen this month. A new low is very much likely if price continues to stay below $170. Further rallies might be limited at $190-200 before the next bearish wave resumes. Unless a fast break above $200 happens, the bears are still knocking. The effect of the Constantinople hard fork tomorrow is hard to call but the bears are written all over the charts again.