Ethereum soars breaks $1000 for the very first time in the early hours on Thursday. What should we expect next for the third largest Cryptocurrency?

5 January, AtoZForex – Ethereum (Ether) prices soars and breaks above $1000 on Thursday on major exchanges. This was preceded by multiple days consecutive rallies. Despite losing its second place to Ripple last month to drop to the 3rd largest Crypto currency in terms of Market Cap according to CoinMarketCap, it has rallied briskly. It’s market capitalization has increased by $3 Billion since yesterday and price by 24%. Despite this surge, it still lies behind the Ripple whose market cap skyrocketed to $131 Billion.

Why have Ripple and Ethereum rallied so fast in just weeks?. It should be noted that nearly 2 weeks ago, prices of major Coins dropped – BTC, ETH, XRP and LTC etc . While BTC has only recovered 20% of the dip, Ether and Ripple recovered quickly and made new highs.

Ripple CEO Brad Garlinghouse argued that it’s not a completely won game for Bitcoin and, there is a room for three major Crypto currencies. Garlinghouse told Fortune.com in October

“In 2017, people have realized there isn’t going to be one Crypto to rule them all. You’re seeing vertical solutions where is focused on payment problems, Ethereum is focused on smart contacts, and increasingly Bitcoin is a store of value. Those aren’t competitive. In fact, I want Bitcoin and Ethereum to be successful.” 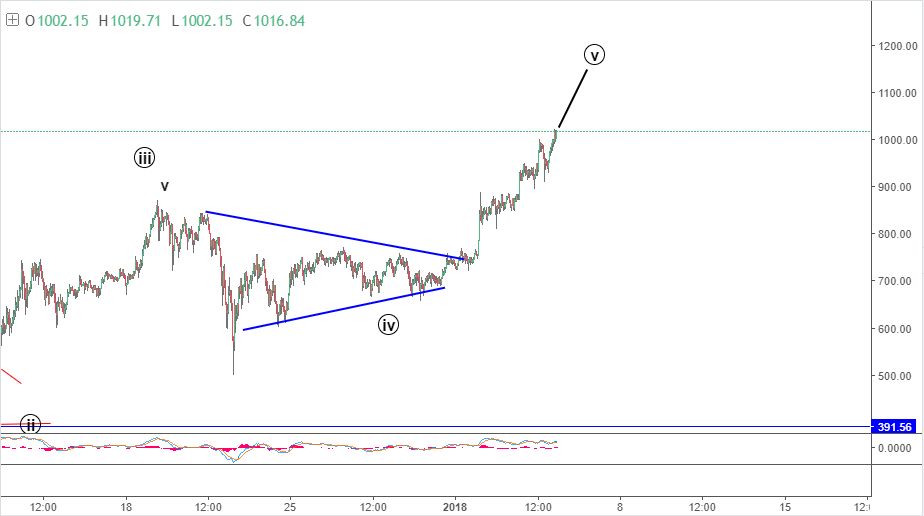 Price broke out of a triangle pattern in the first days of the year. Price is probably heading for a 5th minute wave. I think before any correction -sideways or strong dip, the rally could continue to $1100-$1200.

The rise of Ethereum above $1000 shows that investors are increasingly looking into alternative coins to Bitcoin and this could continue for the coming weeks. The three major Coins now account for about 60% of the Cryptocurrency market capitalization.

Ethereum is a decentralized platform that runs smart contracts: applications that run exactly as programmed without any possibility of downtime, censorship, fraud or third-party interference.

These apps run on a custom built blockchain, an enormously powerful shared global infrastructure that can move value around and represent the ownership of property.

This enables developers to create markets, store registries of debts or promises, move funds in accordance with instructions given long in the past (like a will or a futures contract) and many other things that have not been invented yet, all without a middleman or counterparty risk.