The price of Ethereum's own cryptocurrency network today reached a record high above $4,600, according to data from CoinMarketCap.

On Wednesday, November 3, the price of the second-largest cryptocurrency in terms of capitalization reached $4,639, updating its all-time high. Over the past 24 hours, ether has risen in price by 5.07%, becoming one of the most successful digital assets in the top 10.

At the time of writing, Ethereum is trading at $4,585. Capitalization of the asset reached $541 billion, according to Coinmarketcap.

Goldman Sachs analysts in a recent post predicted another breakout in the ether market over the next two months. They came to this conclusion by comparing the behavior of the cryptocurrency with forward swaps pegged to a two-year US inflation rate with a delay of two years.

If the previous trends continue in the near future, ETH may rise in price, even more, suggests the Goldman forecast. At the same time, analysts noted that inflation expectations could both increase from current levels and reach a peak there.

Read also: Ethereum Will Exhaust Its Potential by 2023 – Charles Hoskinson 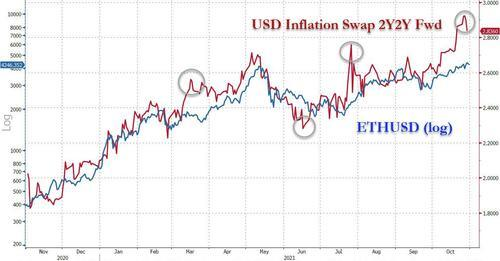 On the Deribit derivatives exchange, meanwhile, Ether options continue to be in demand with strikes between $ 10,000 and $15,000 and expiration in March 2022.

"Since mid-October, we have seen increased interest in options with expirations at the end of this year and next March to go long," says Deribit. “It has become cheaper to insure against a decline, while rates on growth within 3-6 months become more expensive.”

In addition, the Chicago Mercantile Exchange Group (CME) Group announced the upcoming launch of Ethereum-based micro futures slated to be listed on December 6. One such contract will correspond to 0.1 ETH. A similar tool for Bitcoin has been available since May this year.

“Since the launch of Ether futures in February, we have seen steady growth in liquidity, especially among institutional investors,” said Tim McCourt, head of alternative investment products at CME Group." The price of ether has more than doubled since the launch of these contracts, resulting in the need for micro-sized contracts to make this market even more accessible to a wide range of participants."