Ethereum remains in the bearish territory despite the price bounce from $190. The following share technical insights based on the Elliott wave theory.

August 07, 2019 | AtoZ Markets – The Ether has seen its price plummet since late June. The cryptocurrency market generally has moved in a similar manner – losing over $70 billion in six weeks. Ethereum currently exchanges for $225 and still ranked 2nd largest on Coinmarketcap based on market capitalization.

After being resisted around $360 in June, Ethereum has dropped fast and looks likely to drop further unless a fast quick resurgence happens. The price pattern that developed from $82 low to $360 could be interpreted as a corrective surge. On the other hand, if the crypto market finds its way back up, Ethereum might defy the bearish odds and surrender to the broader market sentiments and structure. The $350-360 resistance zone remains the major barrier between the bulls and the bears. If a massive surge happens above $360, the price will have a much bigger change to progress to the all-time high. Otherwise, a dip toward or below the $82 will more likely happen.

The market was overly bullish in the first half of 2019. That was a time when the ongoing trade war between the US and China was very intense. However, crypto prices dropped coincidentally at the time when it looked like there will be a resolution. With the latest developments, the face-off is back. Will Cryptos benefit from political instabilities that affect USD and other major fiat currencies? However logical this may sound, the technicals are not looking appealing on the ETHUSD chart.

From the long-term perspective, Ether completed a complex zigzag pattern at $82. The rally that followed thereafter to $360 looked corrective. As shown with the chart below used in the last update, the dip from $360 is making a bearish impulse wave. 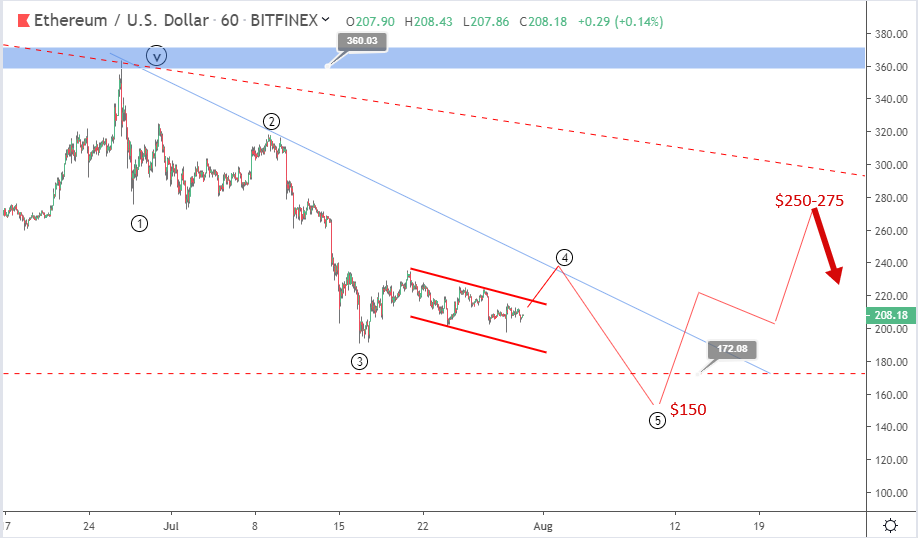 This either means that the large bearish correction from 2018 will continue or a very deep correction of the 2019 bullish trend will complete above $82. In any case, price activities in the coming weeks will be very important. 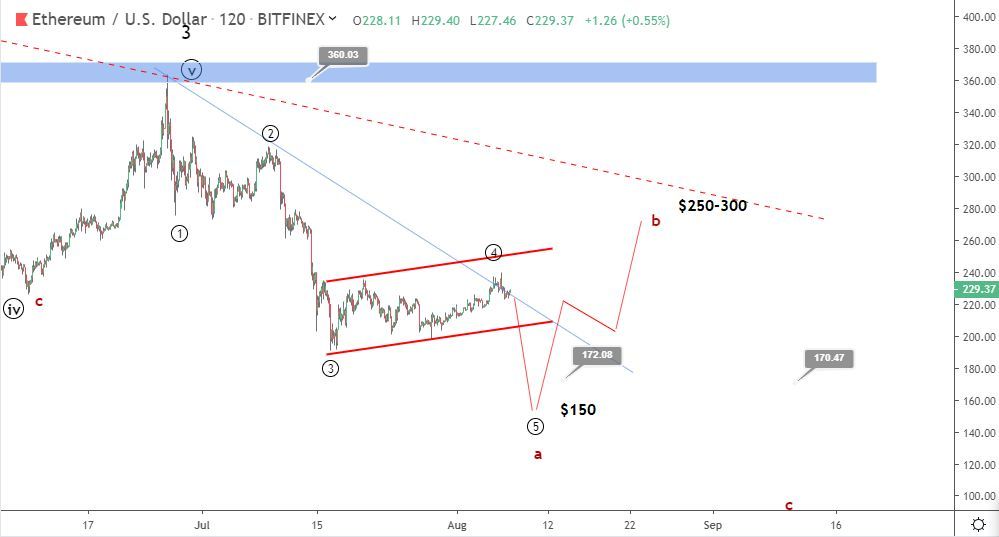 Wave 4 (circled) is about to complete below $250. A dip below wave 4 channel should lead to wave 5 (circled). There is an intraday support level at $170 but the price is expected to dig deeper to $150. Wave 5 might come stronger considering that wave 3 (circled) is not very strong. A 3-wave push back to $250-300 should follow thereafter.