Ethereum is completing a bullish reversal pattern just above $200. Will ETH surge further? The following insight is based on the Elliott wave theory.

July 19, 2019 | AtoZ Markets – Ether could be on its way to $300 but must see off the current bearish correction that started at $360 since June 26. Ethereum lost about 47% in just three weeks when it hit $191 on Thursday. In the same period, Bitcoin and other altcoins were all in red. Despite the dips, Ethereum remains the second-highest capped Cryptocurrency on Coinmarketcap with $23.35 billion.

The Alts are not looking as assured as Bitcoin. This suggests that Bitcoin dominance could even increase in the coming months. While Bitcoin surged to the 61.8% correction of the 2018 trend, Ethereum only hit below the 23.6% retracement of the 2018 bearish trend. In fact, Ethereum lost over 50% of the bullish run from December 2018 before the current recovery. The daily chart below shows Ethereum still looks corrective and bearish from the December low. 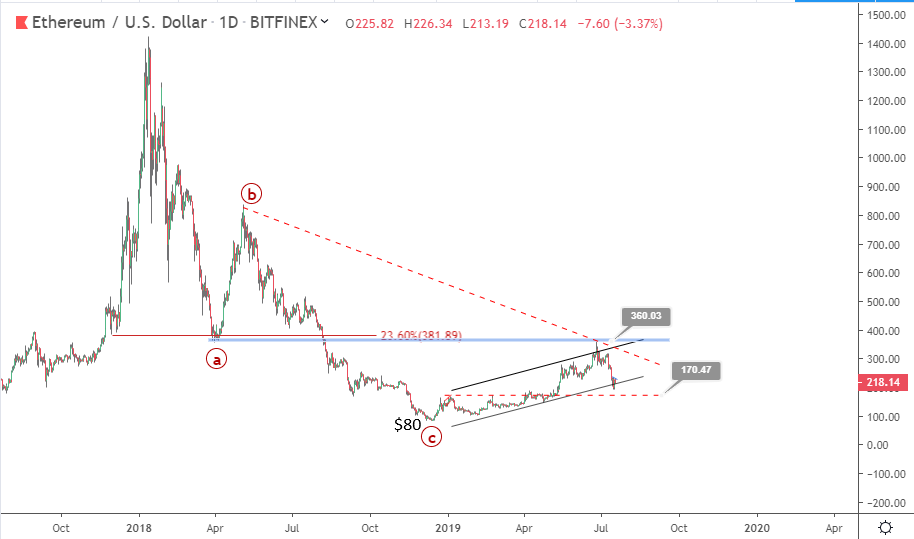 The chart above shows Ethereum has entered into the bearish territory after a rally that looks a bit corrective and the dip that looks like a trend continuation move. Unless a fast rally happens above the broken channel in the chart above, Ethereum might remain below $200 and dig further below $80. Like Ethereum and Ripple. Like Bitcoin and Litecoin. It remains to be seen how the general Crypto market will unfold in the coming weeks and month. However, from a technical perspective, it doesn’t look good for Ethereum. Unless a huge surge happens above $350, ETH could lose further. However, the current intraday rally could continue $250.