Ethereum is close to the $355 resistance level after it rallied to break above $300 for the first time in 10 months.

June 24, 2019 | AtoZ Markets – ETH has maintained its position as the second largest cryptocurrency based on market capitalization. After price rallied to $288 in late May, it retreated to $225 to test a critical support level. Price advanced further and broke above the $288 previous high to establish a fresh 2019 high at $320. However, the price is currently struggling to hit higher prices after it dropped below $300 on Monday. Currently, Ether exchanges hands for $310. A further bullish push will definitely see a hit of the $355 resistance level. The $355 level was formed in early April 2018 when it supported price from further free falls for about a month. However, the bulls couldn’t hold it longer and a free fall that started in May 2018, caused a break of this price level in early August of the same year. It will be interesting to see how price reacts to this important level when it visits.

Ethereum, despite gaining an impressive 250% since it bottomed at $82, is not among the top gainers and has lagged a bit behind in the current cryptocurrency recovery phase. While Bitcoin, Litecoin and Bitcoin Cash have recovered nearly 40-50% of the entire bearish 2018 bearish trend, Ethereum has recovered less than 20%. The 2nd largest cryptocurrency is expected to advance further to $355 first and then to higher levels.

From the perspective of Elliott wave theory, Ethereum current rally from $82 exhibits the properties of an impulse wave. A similar pattern can be seen on BTC, LTC and BCH though BTC and LTC seem to be ahead. The chart below shows the emergence of an impulse wave from $82. 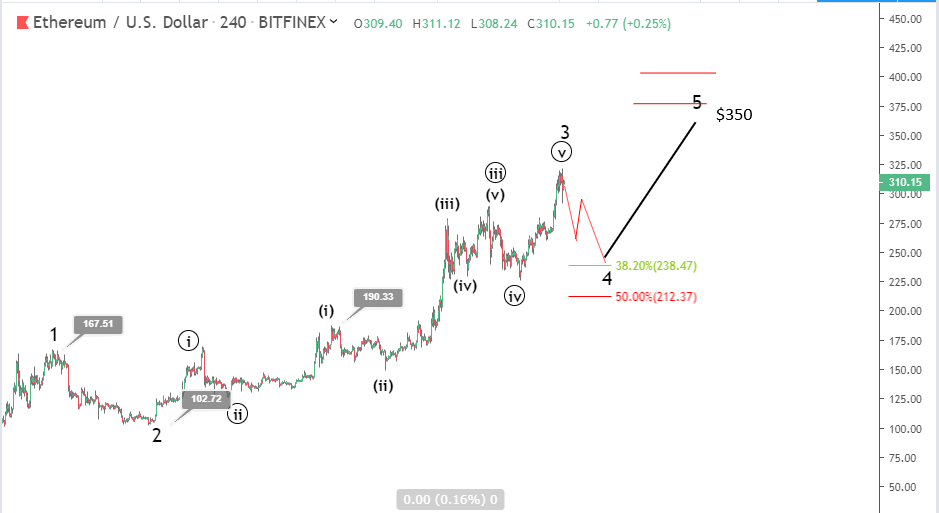 From the chart above, the 3rd wave is close to completion. A dip to $240 or slightly below is expected before price advances further to the $355 critical level to complete the 5th wave. We might see the altcoins outperforming Bitcoin in the coming weeks.

Tags Cryptocurrency Elliott wave analysis Ethereum price prediction ETHUSD forecast
Disclaimer: The views and opinions expressed in this article are solely those of the author and do not reflect the official policy or position of AtoZ Markets.com, nor should they be attributed to AtoZMarkets.