Ethereum hit $290 on some exchanges on Thursday. The cryptocurrency has now gained nearly 70% since the turn of 2019.

The cryptocurrency market continues the 2019 bullish recovery with major currencies recording significant gains since they bottomed in December 2018. Ethereum is not among the top 5 gainers in 2019. However, it has gained over 240% since the December low. After struggling to break out in the first quarter of the year, thrice testing the previous $167 high, the 2nd ranked crypto has now gained 70% in 2019 alone.

This week, the altcoins aggregate has outperformed Bitcoin with EOS, IOTA and Litecoin among the top gainers. Bitcoin’s dominance has therefore dropped from 57% to 55.5% according to the information available on Coinmarketcap. The entire market capitalization is close to $280 billion which is a huge improvement on what it was at the start of the year. Ethereum which currently trades at $280 remains the 2nd ranked crypto with a market capitalization of $30 billion and has gained over 5% in the last 24 hours (at the time of writing this report). Ethereum price seems to still have some way to go in the upside direction as it aims the $375-$400 significant price zone.

From the Elliott wave perspective, Ethereum was expected to make an impulse wave to the upside if it has truly bottomed at $82. Bitcoin, Litecoin and Bitcoin Cash are close to completing impulse wave patterns from their respective lows. Because of this, we reckon that a bearish correction could be close. However, Ethereum has a different structure compared to LTC, BTC and BCH. The chart below was used in the last update. 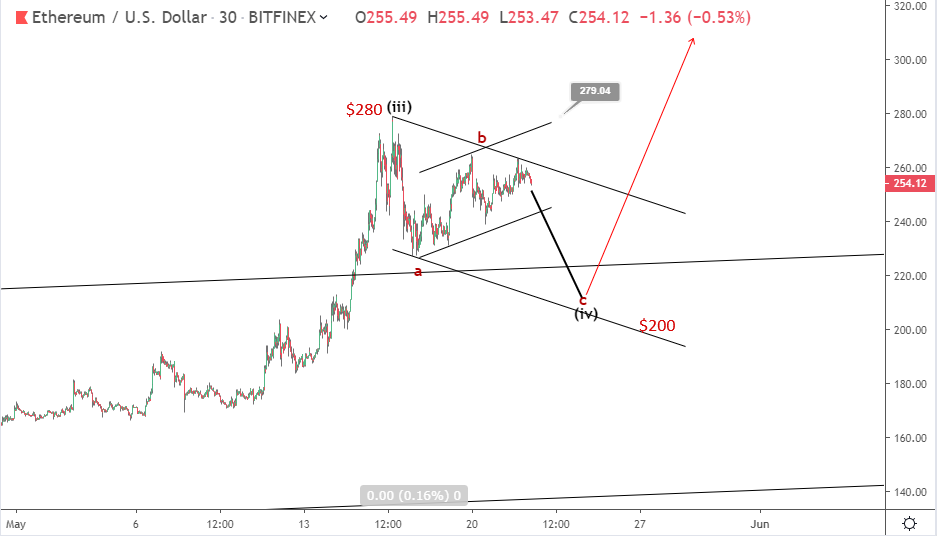 Price completed the 3rd sub-wave of wave 3 at $280 and dropped to $225 to complete the 4th sub-wave. With the break above $280, the impulse wave continues. The chart below shows that the bullish run could extend toward $375-400 before a major bearish correction happens. 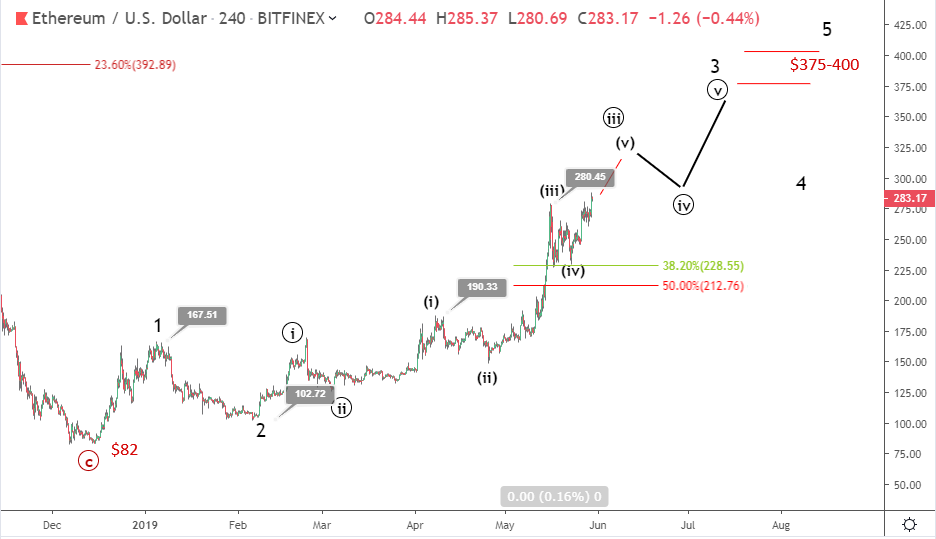 Wave 3 is not yet complete and it remains to be seen if Ethereum will complete the run before the 3-wave correction. Other majors are much closer to completion than Ethereum and Ripple. ETH and especially XRP are surely lagging behind in 2019. Perhaps they would be the two of the best performers in the coming weeks or the market is not yet ready for a deep bearish correction.