Get VIP Trading Signals Market Watch
Trade Now Your capital is at risk.
Ethereum is turning bearish this week after a bright start. The following Ethereum Price Prediction shares insights based on the Elliott wave theory.

November 26, 2020 / AtoZ Markets - After gaining over 97% in November, Ethereum is shedding significant profits on Thursday as investors book profits on cryptos. The bearish move permeated the entire digital coin market. Bitcoin is down by 3% so far this week after an over 10% slump recorded in the last 24 hours around 12:30 PM GMT (according to CoinMarketCap). The slump came just when the premier crypto was a tiny distance away from hitting its all-time high. Optimism is back! It's time of the cycle again when everyone rushes to be part of the buzz. However, picking this kind of top has shown historically to be a bad idea unless it's for Hodling. With BTC hitting a new record market cap high, the Alts are still some distance away from catching up with the king. Ethereum has not yet hit halfway to its all-time high and has even performed better than many of the other Alts.

Ethereum has gained over 390% in 2020 so far and 40% in November alone. The second-largest crypto with nearly $58 billion in market capitalization currently exchanges hands for $520. Meanwhile, it's up by 8.6% after shedding 13% in the last 24 hours (at the time of writing). Could Ethereum recover all of the recent losses or shed more of the November gain? Ethereum 2.0 Launch is starting on December 1 as deposit contracts went live. Whether this will trigger a massive rally immediately or later remains to be seen. Meanwhile, let's look at the technical side. We might get some important clues.

Ethereum surge in 2020 has been good but not that impressive especially when compared with Bitcoin. In fact, as the Ethereum price prediction in the chart below shows, a diagonal pattern completed just above $600. The pattern could mean the first leg of the final recovery from the bearish phase with $81-83 as the bottom. 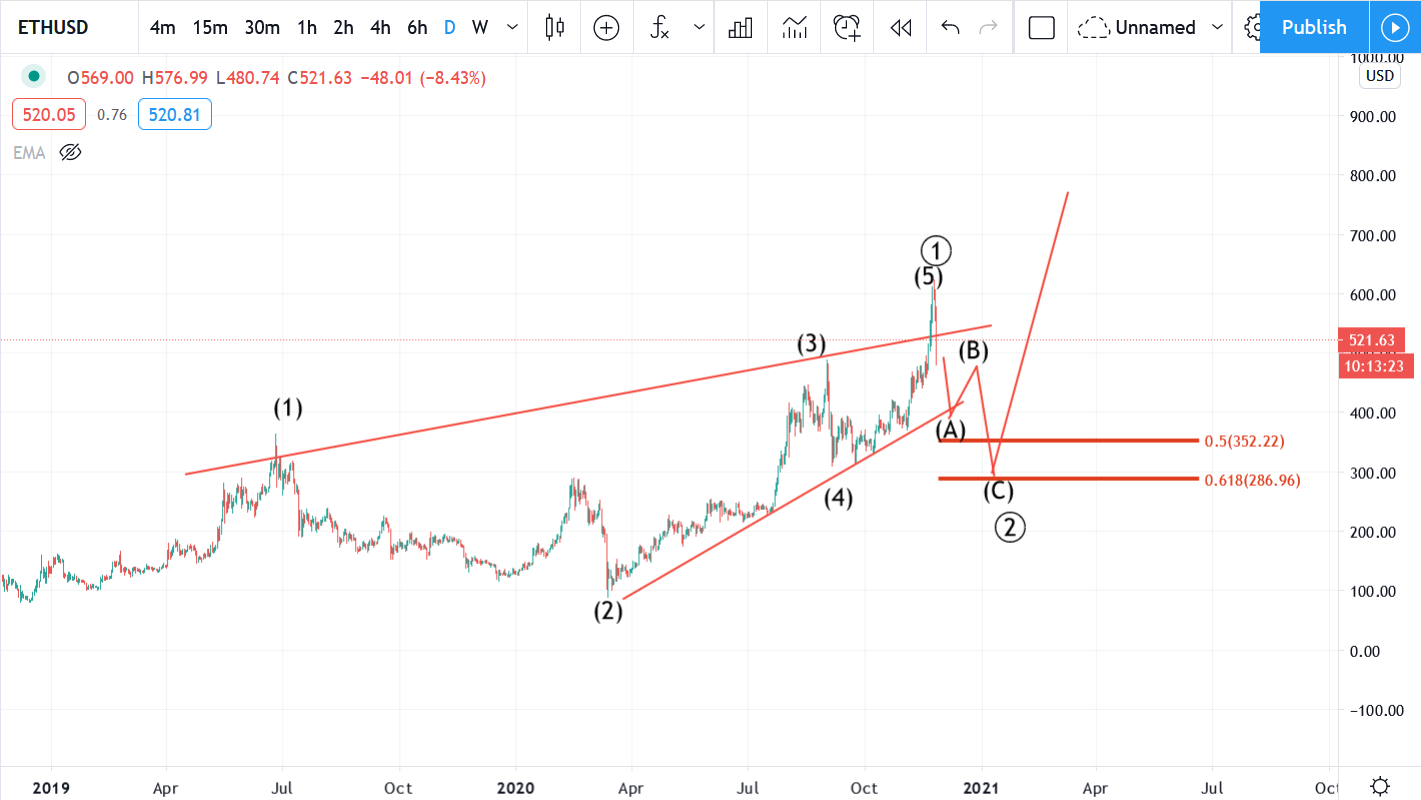 If the price surge above the recent high, we might be looking at a bullish impulse wave instead. On the other hand, if a decline strengthens to $450, the bearish corrective wave 2 could decline to the 61.8% Fibonacci retracement at $287-$300 before wave 3 confirms the continuation of the recovery above $625. At that time, we can look forward to flight toward the all-time high.