While the eyes of investors from all over the world are focused on Bitcoin, another top cryptocurrency has been outperforming the coin. As Ethereum Price Hits New All-time High Above $800, we look into the future of the digital currency.

19 December, AtoZForex – We are almost midway in the third trading week of December, and cryptocurrency market just won’t stop surprising us with the new all-time-highs. While the total market cap of the cryptocurrency market has surpassed $600 billion level, many investors wonder what awaits digital currencies in the upcoming year.

One of the best performing cryptocurrencies in 2017, Ethereum, has pleasantly surprised those, who hold ETH in their portfolio. The cryptocoin has been on a steady rally over the weekend, adding almost 20 percent to the price since Saturday.

Today, Ethereum has posted the biggest gain among the top cryptocurrencies in the afternoon. The digital currency by VItalik Buterin has added more than 6 percent, only to hit a fresh all-time high of $834. 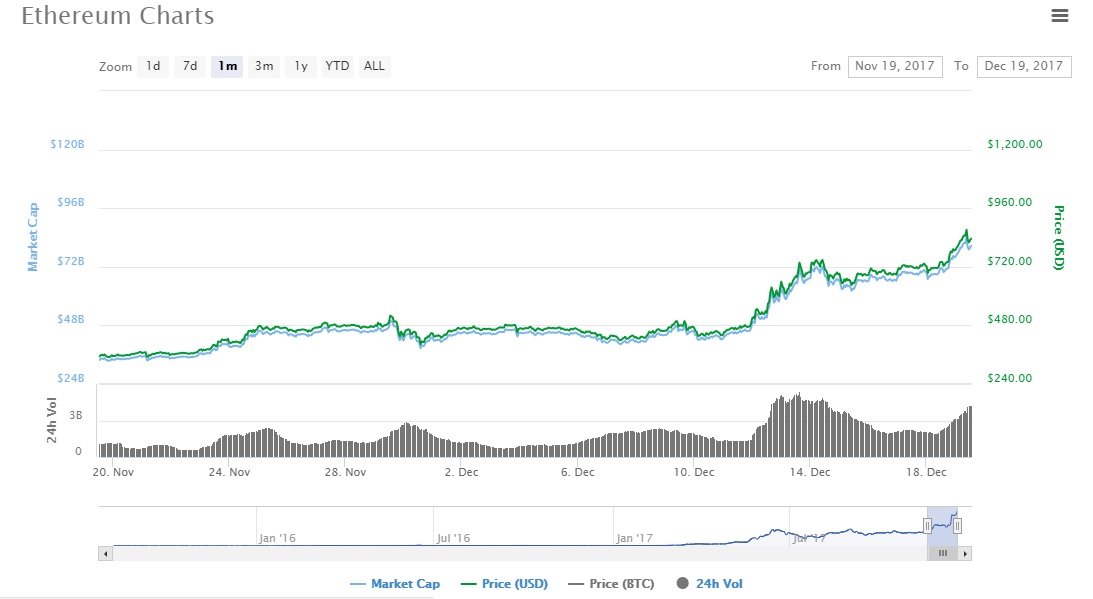 In fact, Ethereum price developments have emerged as a key to spot the last Ethereum price surge. As of now, the technical side of the picture signals the potential bullish breakout. In this scenario, the bullish target would stand at around $1100. As for the support levels, the first one would appear at around $620, with the second one being at $500.

What awaits Ethereum in the future?

In addition, Bitcoin still steadily (sometimes with minor corrections) continues to rise in value. As the pioneer cryptocurrency grows, so do the altcoins by joining the upward trend. The overall market efforts might even soon result in cryptocurrency market capitalization hitting half a trillion dollar mark.

In the course of the last 24 hours, Ethereum network has managed over 1 million transactions. For comparison purpose, Bitcoin has handled 412,883 transfers over the same period of time. Although Bitcoin processes over 17,000 an hour, it is still falling behind Ethereum speed.