Ethereum has surged recently and many believe this is due next week upcoming hard forks. Will Ethereum gain more or resume the bearish trend?

January 08, 2019 | AtoZ Markets – Etheruem has been among the best performing Cryptos this year. After it regained its status as the second most capitalized Crypto overtaking Ripple, its prices have surged in the past few weeks. The demand in the 2nd largest Crypto is believed to be largely attached to the hard fork. Traders are snapping up Ether ahead of next week’s hard fork, when the constantinople update will be expected to be applied to Ethereum blockchain. The hard fork is expected to cause changes that will lead to faster Ether transactions, delay in mining difficulties and reduced supply of new coins.

What is a Hard Fork?

Hard forks are updates that are applied to the blockchain code. The update will force all the nodes in the system to update. Sometimes hard forks lead to a split of blocks into separate chains with each running its own version of the cryptocurrency. The upcoming update is expected to cause the delay of the notorious difficulty bomb. Difficulty bomb is a process introduced to increase the difficulty of mining, which will therefore lower profitability until there’s none. This helps to stabilize the system. One of the things to be addressed with this hard fork is measures to reduce the supply of new coins . This can be done by cutting down rewards generated by mining Ethereum from ETH3 to ETH2. This in turn could drive prices higher. Since the talk of these upgrades, Ethereum has gained 45% to hit $168. It currently exchanges for $155 two weeks after its 2018 low of $82.

This hard fork is not expected to be enough to drive prices much higher. If the problems associated with supply are minimized by cutting the supply of new coins, there also is a problem with demand. If 2018 was something to go by, demand for cryptos including Ether went down and most major cryptos lost 80% or more of their values in just about a year. To address this problem, the entire industry needs better structure, institutions and regulations. The challenges of cyber theft must be brought to their kneels and so is market manipulation.

One other major challenge is scalability. Blockchains all have a maximum block size and creation time. This limits the number of transactions that can be processed and added to the chain per second. Ethereum currently, can handle a single figure of transactions per second. Visa for example can handle 24,000 at the same time. Therefore, future updates of Ethereum must include how this problem will be solved. Ethereum, Bitcoin etc should be able to beat the traditional payments providers by being able to complete 1 million transactions per second. All these will accelerate the inclusion of the Crypto market into the mainstream markets and thereby fulfill its potentials.

It remains to be seen whether prices have bottomed. Some argued that 2018 bearish trend was not new to Bitcoin and other majors. In fact, it has seen worse dips in the past. After each dip, it usually flies and make multi-year highs. This might be the case but until prices sufficiently commit upside, there are no hopes in sight. For example, Bitcoin should continue the current recovery to $6000-7000 to even start the talk of a total recovery. The chart below shows how Ethereum has performed since the $82 low. 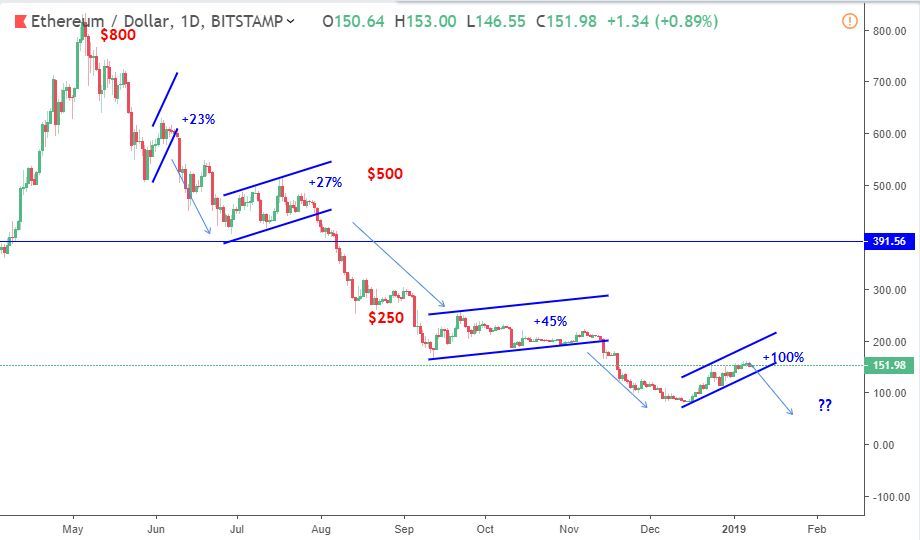 After a quick massive 75% drop between January and April 2018, Ethereum staged the deepest recovery. Since price resumed downside in April/May 2018, the fall has been free with minor pullbacks of 23%, 27%, 45% and now 100%. The current recovery looks similar to the other three and might also be followed by further falls. A big move is required up to 250 and 500 to consider a major recovery. Will the hard fork trigger this move? Only time will tell.