April 01, 2019, | AtoZ Markets – When the market is decentralized and free, increased competition is bound to occur. The cryptomarket experts firmly believe that a competitive market offers a wide range of investment options to the investors which becomes a great fuel that moves the entire platform forward.

While the competition in the crypto market is bringing a lot of new choices, it is also causing a shift in the market share. Ethereum, which is considered as a popular blockchain platform from the many open source platforms, has successfully kept a stronger position in the sector since a long period of time. But with the increasing competition from blockchain projects such as EOS and Stellar, it seems that Ethereum market share drops, also losing its popularity to its competitors.

Like many other cryptocurrencies, Ether too has faced the price actions which is termed to be as fully negative. While Ethereum did climb high at one point by reaching the price of $1,400, it also dropped to about $90 afterward. At the time of press, it is being traded at $142.47 with a market cap of $15.06 Billion, according to coinmarketcap stats. 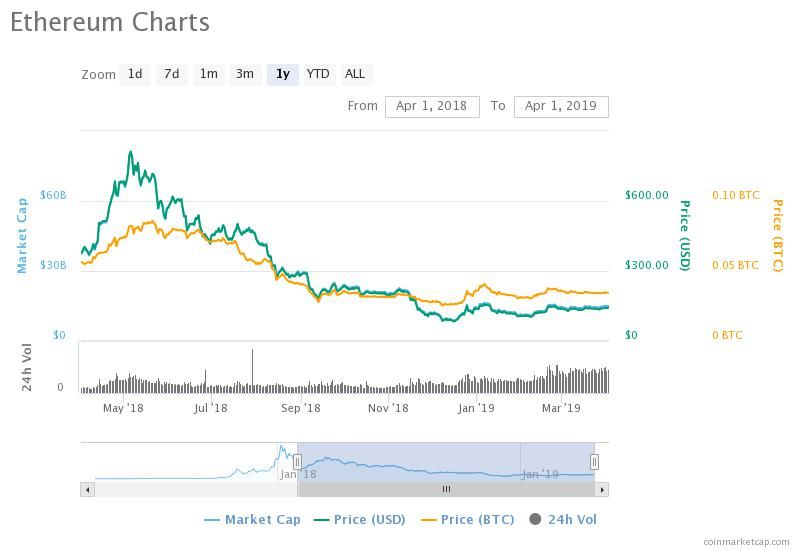 However, Ethereum has not registered significant recovery of the losses it has faced as much as the other cryptocurrencies have. But considering the market capitalization rankings, Ether was largely successful in maintaining its second rank.

The present market scenario does seem good for Ethereum, traders are still considering it as a great investment option because of its position as the second biggest cryptocurrency by market cap. However, Ether’s competitors are gradually drawing increased numbers of dApps and developers which may prove to be the key elements helping them beat Ethereum in the long run.

Brighter future for EOS and Stellar?

The arrival of rival blockchain-based platforms such as Stellar and EOS can be considered as the main reason behind the slowdown of Ethereum. EOS and Stellar are offering several long-awaited services effectively and efficiently, which make many startups shift to them and use their respective native currencies to raise funds through ICOs despite enduring regulatory concerns about the sales.

The market share for dapps has shifted already. Only 28% of dapps users were on the Ether network as of January 2019, compared with 100% last year, according to tracker DappRadar. EOS coin accounted for 48% of active dapps users, while Tron has grabbed 24%. Of total dapps released in January, Ethereum was still ahead, with 40% of market share, according to DappRadar. EOS and Stellar are already at about 30% each.

Last year Ether had 100% dApps users on its network which has fallen down to 28%, last recorded in January this year. The majority of these migrated users have joined the EOS and Stellar network as it presently has 48% users while the remaining 24% have switched to Tron.

Patrick Barile, DappRader’s COO has expressed his opinion on the reason on Ethereum market share drop. He believes the newer protocols such as EOS and Stellar are offering greater speed and are capable of handling high transaction volumes which will result in significantly enhancing the overall user experience.

China Releases Metal Reserves to Stabilize Prices and Calm Markets
Forex Crypto
Top 5 Forex Brokers
Top 5 Crypto Exchanges
Your subscription could not be saved. Please try again.
Thank you for subscribing. You will be the first to receive all the latest news, updates, and exclusive advice from the AtoZ Markets experts.
Everyone is reading
SEC Lawsuit Against Ripple May Drag On Until 2022
Ethereum Facing Support Around $2,300 Price Area - Will Strike Upward?
Danske Bank Rejects Cryptocurrency Trading
close ×