October 1, 2019, | AtoZ Markets –  Ethereum Foundation community manager Hudson Jameson explained on Twitter on September 30 there are miners still depend on the old Ropsten testnet, while others are already mining on the new one.

Cointelegraph earlier reported that Jameson said “the launch of the hard fork testnet was programmed for early October. For those who do not know how it works, we choose a block number which, according to our estimates, should be around October 2. However, this could be one or two days back or forth from that date, based on the speed of production of the blocks from here to then “.

Initially scheduled for activation on October 2 at block height 6,485,846, Istanbul was published two days earlier than expected on September 30 at about 3:40 am UTC.

However, blockchains are complex systems and their updates are difficult to predict accurately. Istanbul arrived two days earlier than expected due to confirmation times of unusually rapid blocks, according to Jameson. Usually, miners on a proof-of-work blockchain such as ethereum and Ropsten’s testnet network are required to manually update their software to safeguard the smooth continuation of a single chain.

Most of the miners of Ropsten’s testnet network were unaware of the arrival of Istanbul, which led to a division of the testnet between those mining on the newly updated chain and those who continue to mining on the old chain.

Last October, a similar event occurred after the activation of the previous update of the ethereum system, which led to a temporary division of the chain on the Ropsten network lasting several hours.

Péter Szilágyi, Team leader of the Ethereum Foundation, wrote on Twitter that “the Ropsten Ethereum testnet Istanbul forking test is a bit unstable due to a huge miner pushing the non-forked chain “. 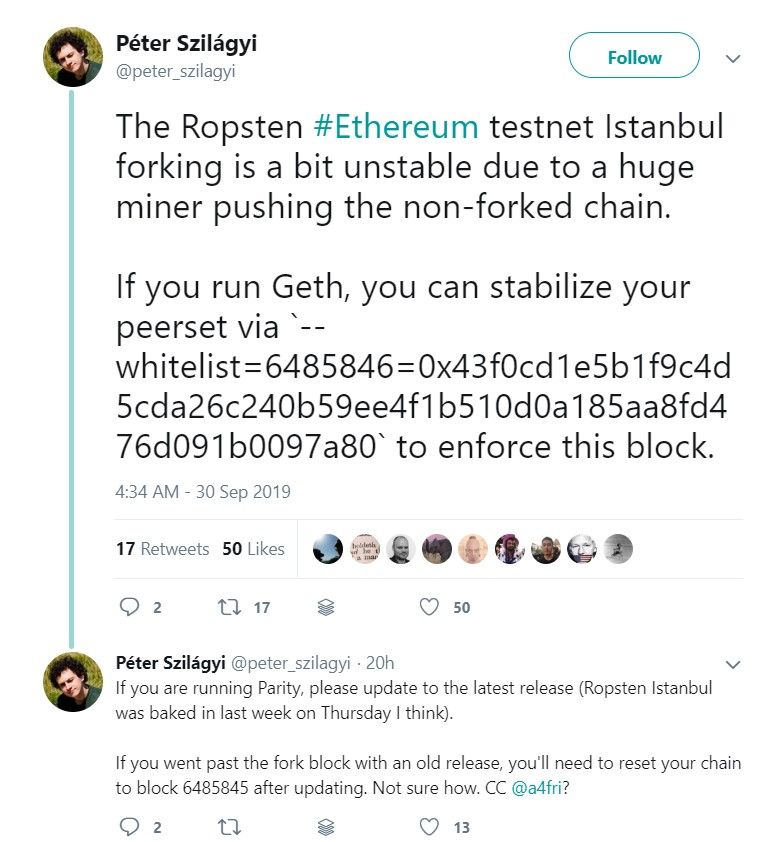 Jameson also pointed out that this is what the testnet is for and that Ropsten’s testnet will be unstable until all this takes place. It is not clear if this hiccup will have any effect on the activation of the Istanbul hard fork.

The complicated part of the job trial testing network is getting coordination among the miners, Jameson said on a call Monday afternoon.” Right now, we’re trying to make some miners work to get Ropsten on the correct Istanbul chain “. Jameson added that the problems with the Ropsten network so far seem to be the result of poor communication with the miners, not defects in the Istanbul update code.

As such, how this testnet split will ultimately affect the activation of Istanbul on the main network of the ethereal is yet to be determined. The developers of Ethereum core will have a call on Friday, October 4 to discuss the activation of the Istanbul testnet.