March 13, 2019, | AtoZ Markets –The Chairman of the US Securities and Exchange Commission (SEC) Jay Clayton during one of the latest interviews has confirmed that according to his agency Ethereum (ETH) is not considered as a security product. This announcement means that this digital asset falls under another regulatory structure that is much more crypto-secure. However Ripple (XPR) status stays unclear.

Ethereum and SEC relationship is not the most popular topic

The US SEC Chairman Jay Clayton (pictured below) also added that cryptocurrencies like Ethereum will not be classified as securities. However, he did not name any specific cryptographic tools. 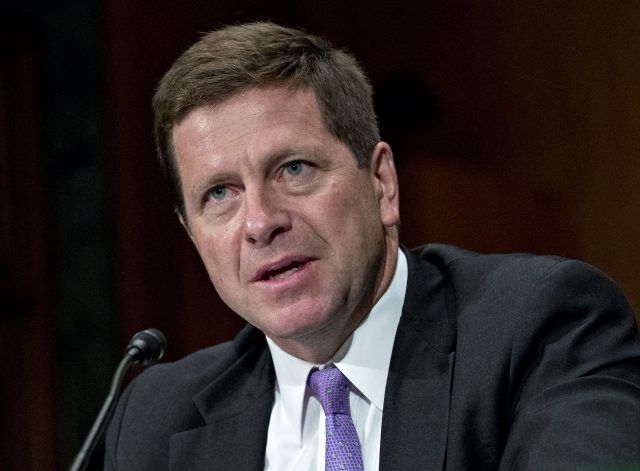 The news that Ethereum is not security was welcomed by investors of this project. However, it did not come as a surprise. At the moment, investors are most interested in what SEC thinks about XRP – the cryptocurrency most often associated with FinTech Ripple.

Many investors interested in cryptocurrency are usually very concerned and feared by the governmental regulatory agencies, like SEC in the US, CySec in Cyprus or FCA in the UK. The main fear of crypto enthusiasts with regards to the regulators is that such governmental agencies seek to stop innovations that may pose a risk to investors.

“Overall, I believe we have taken a balanced regulatory approach that fosters responsible innovation in this area, while also protecting investors and the markets,” Chairman Clayton explained while referencing the application of federal securities laws to digital assets.

Nevertheless, according to Clayton’s recent response to a letter from the Coin Center the US financial agency adopted a balanced approach to regulating emerging markets of cryptos. Atoz Markets mentioned a change in the attitude of the US SEC  toward digital assets and a softer approach of the authority to regulating digital currency in an article earlier.

The previous decision regarding Ethereum and Bitcoin has been confirmed

Along with confirming his agency’s previous decisions regarding the classification of Bitcoin and Ethereum as not securities, Clayton also explained that they will continue to use the “Howie test” along with other tests developed on the basis of case law to determine regulatory asset management acts.

“Generally, we look at whether the digital asset fits the definition of a security as set forth in the federal securities laws… We also apply tests developed through case law, including the well-established ‘investment contract’ test articulated by the Supreme Court in SEC v. Howey and its progeny,” he noted.

Will XRP become a Securities Product?

For a long time, investors and crypto giants have suggested that XRP may be a product of securities in accordance with the regulatory framework established by the SEC. Nevertheless, even the close relationship of cryptocurrency with FinTech Ripple did not help in the promotion of this initiative.

However, the crypto community later discovered that the aforementioned cryptocurrency was registered on the Coinbase exchange. As a result, some investors believed that the stock exchange had determined that the digital asset is not really a product of securities.

Clayton did not mention in his response to the Coin Center any crypto namely. Moreover, those associated with the SEC largely remain silent when it comes to XRP. The US SEC Chairman although explained that some products that could originally have been designated as securities products can eventually grow out of this definition.

It is unclear whether XRP can be one of these types of assets. Nevertheless, the crypto community is likely to be pleased to hear that a financial agency is still moving toward regulating individual digital assets, although quite slowly.

Tags coinbase Credit Card Ethereum price forecast Ripple Trust Wallet
Forex Crypto
Top 5 Forex Brokers
Top 5 Crypto Exchanges
Your subscription could not be saved. Please try again.
Thank you for subscribing. You will be the first to receive all the latest news, updates, and exclusive advice from the AtoZ Markets experts.
Everyone is reading
Top 5 Forex MT5 Indicators for 2021 you should try
Top 5 Cryptos to Watch in Quarter 2 2021
Bitcoin Facing Resistance Around $60,000 Event Area - What Next?
close ×