The cryptocurrency market resurgence continues as Ethereum spiked above $200 for the first time in over six months.

May 14, 2019 | AtoZ Markets - Ethereum has gained about 33% in 2019 after hitting over $200 to continue the April resurgence. The crypto market turned into the bullish zone in April. Prior to this time, most cryptocurrencies have minor gains that looked like another round of corrective bounces similar to what the market had many times in 2018. After the bounces, new lows were very likely to follow. However, the April surges showed that prices might have bottomed in December 2018. Bitcoin, the falgship cryptocurrency, has gained over 140% since it bottomed at 3100 while Litecoin has even performed much better with over 300% gain in the same period. Ethereum has almost the same profit margin as Bitcoin with nearly 150% from the $82 low recorded in December 2018.

In the Asian session on Tuesday, the total market capitalization has risen to $233 billion. This means the market has had $100 billion injected in 2019 which is by far the biggest seen since the second half of 2018. 9% of this has come from the Ethereum market pool. The cryptocurrency remains the 2nd top ranked on coinmarketcap with nearly $22 billion in capitalization. With over 8% price surge in the last 24 hours, Ethereum price has spent the last one hour above the $200 handle. What are the next price target levels for ETHUSD?

Shortly after hitting $190 earlier this month, ETHUSD price was about completing a head and shoulder reversal plan. This was taken as an imminent sign of weakness - a dip to retest $150 before surging further. However, price never broke below the pattern neckline for confirmation. It invalidated the pattern with a break above the $190 top and a 23% bullish run from $170 (the pattern neckline price). Is price getting to the overbought zone? 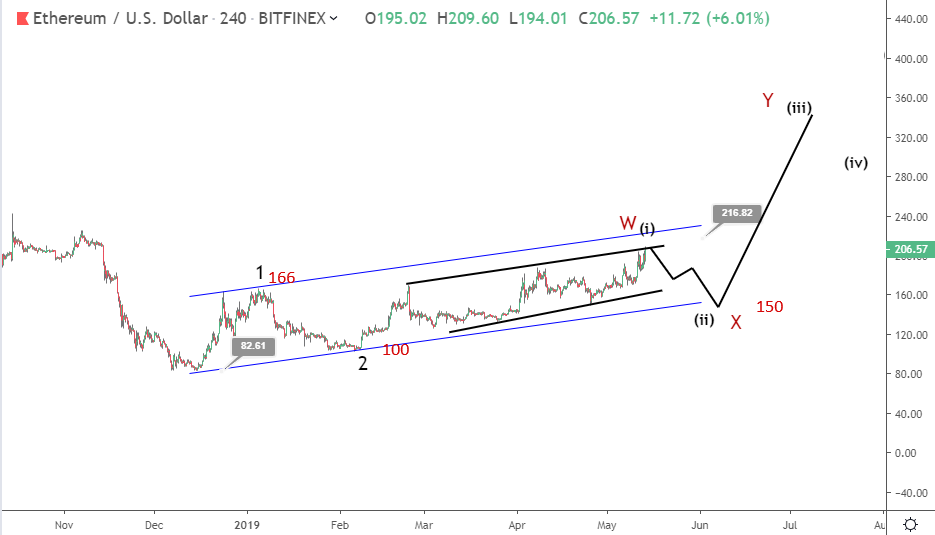 The ETHUSD price chart above shows the rally from 82 bottom. Price still looks corrective in a channel. A zigzag pattern leading to new lows or a double zigzag rally above 350 after a short dip are very much likely. However, with Bitcoin making a trendy rally, the preferred wave count is shown in black. Wave 1 ended at 166 and price currently at (i) of 3 with a leading diagonal pattern. Price is most likely overbought at the current level and a short dip to 166-150 zone is expected before a big surge toward 350-425 price zone. However, a break below $100 will turn ETH further bearish.