Ethereum flash crash on Coinbase Pro Market caused concerns among traders on Thursday. The 85% decline happened fast within seconds after which price returned to normal.

December 07, 2018 | AtoZ Markets – ETH/USDC caused panic among traders who use Coinbase pro market platform on Thursday. Price quickly dropped from $103 to $13 in a matter of seconds and quickly rallied back close to $100 causing a 85% flash crash. Traders who experienced this, took the matter to the social media sharing pictures of the abnormal price movement. Some believed the panic crash was caused by algo-trading bots. Coinbase confirmed the crash and wrote on its Twitter page:

We’re aware of price movement on one of our order books that happened over the course of regular trading activity. Over the 24 hours, all Coinbase platforms have operated as planned and no system-wide incidents have been identified

However, Coinbase has issued a refund for traders who suffered losses from this incident. Ethereum which lost its place as the 2nd largest Crypto to Ripple last month has stayed below $100 to hit a fresh 2018 low. Last week 25% jump to $126 couldn’t be sustained as the bears took over again. Ethereum currently exchanges for $85. 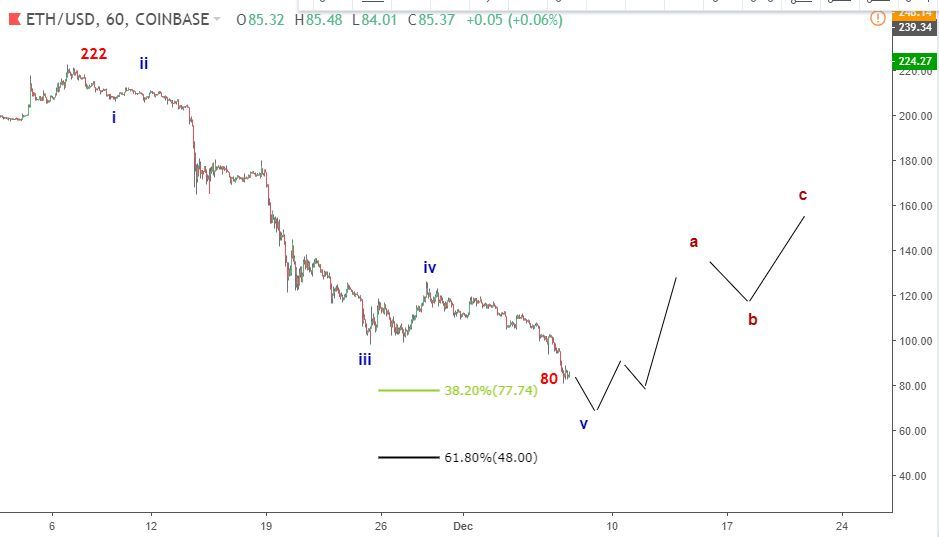 The new bearish wave started early November. All the major cryptos fell drastically. Ethereum lost 64% market value in a month after declining to $80. However, price might be getting ready for a bigger bullish correction. The drop from $222 to $80 is about completing an impulse wave just as seen on Bitcoin price analysis. The price low that will be the base of the bullish correction is not clear until price forms a reversal pattern. Possible reversal price levels are at $75-80 and $48-50. A 3-wave bullish correction should at least follow to $150 or above. If the rally happens and breaks above 222, a bottom would probably have been established.