The emergence of Bitcoin as the alpha cryptocurrency has changed the world in many ways. Investors, exchangers, and even Central Banks see Bitcoin as a safe haven. We can now purchase items, pay for goods and services and trade with Bitcoin. Due to it's resilient nature, buying and holding alone could yield profits within a short period. That said however, it appears that Bitcoin may have a few challengers soon. Among them is Ethereum. In this article we will analyse the relatively new cryptocurrency, Ethereum: Do we have the next Bitcoin already?

17 March, AtoZForex – Cryptocurrencies are known for and respected for their immense volatility. Ethereum is an open source, public, blockchain-based distributed computing platform featuring smart contract functionality. It was initially released in 2015. Over the past few months, as with a few other cryptocurrencies, its value has surged dramatically. Ethereum prices have risen over the last several sessions, following the broader digital currency market higher. This is a ripple effect after the SEC opted to reject the Bitcoin ETF proposed by the Winklevoss brothers.

Ethereum: Do we have the next Bitcoin already? What the future holds 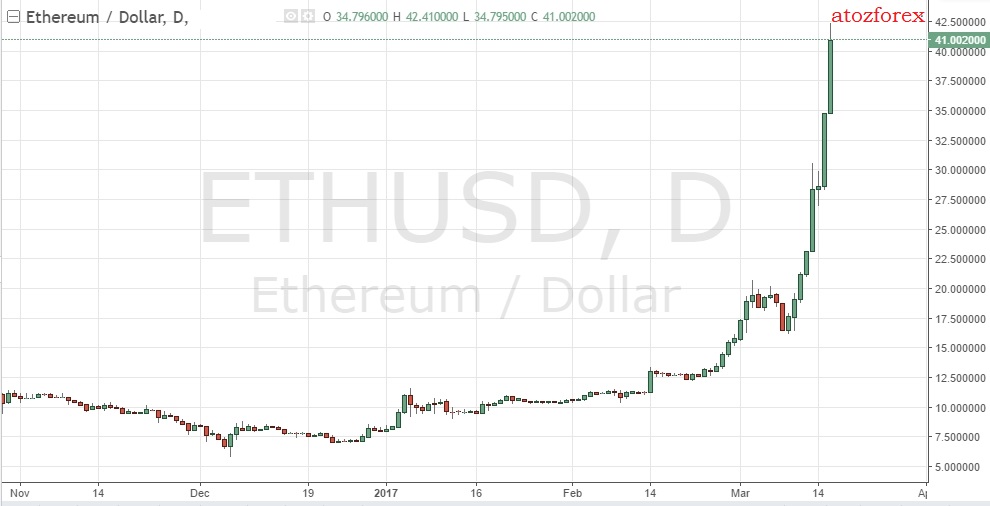 According to IEEE Spectrum, “Some of the biggest names in the sectors of finance and software—including Intel, Microsoft, J.P. Morgan, and Accenture—finally stepped into the fray, announcing their intention to work together on a private version of the Ethereum blockchain. Their efforts will be coordinated under the auspices of a new non-profit organization called the Enterprise Ethereum Alliance.

As Ethereum continues to trade at all-time highs, it will likely become more popular and accepted worldwide. Many analysts believe that there are far more gains to be made in altcoins than Bitcoin. To invest in Ethereum, a speculator can open a Coinbase account, add a means of payment, then begin making transactions.

Think we missed something? Let us know your view on Ethereum in the comments section below.