April 8, 2019, | AtoZ Markets – Ethereum Classic (ETC) became the largest gainer among the top cryptocurrencies due to the Atlantis network upgrade. After a 51% attack experienced by the network at the beginning of the current year, ETC is improving its presence in the market with a new update.

This time, Ethereum Classic will be upgrading to ECIP-1054 (Ethereum Classic Improvement Proposal) that is called Atlantis. This upgrade will allow the network to integrate “Byzantium” and “Spurious Dragon” that was made in Ethereum and would assure cross chain compatibility.

At the time press, Ethereum Classic is the 17th largest cryptocurrency in the market with a market cap of $792 million and a price per coin of $7.23. In the last 24 hours, Ethereum classic surges more than 25%.

ETC core developers prepared this hard fork specification that will be integrating the mentioned improvements made in Ethereum to assure compatibility across chains. ETC’s blog post explains the current situation in the market, “ECIP-1054 named “Atlantis” has undergone developer technical discussion and is ready for a wider community discussion with node operators, miners, and the rest of the network participants and users.” 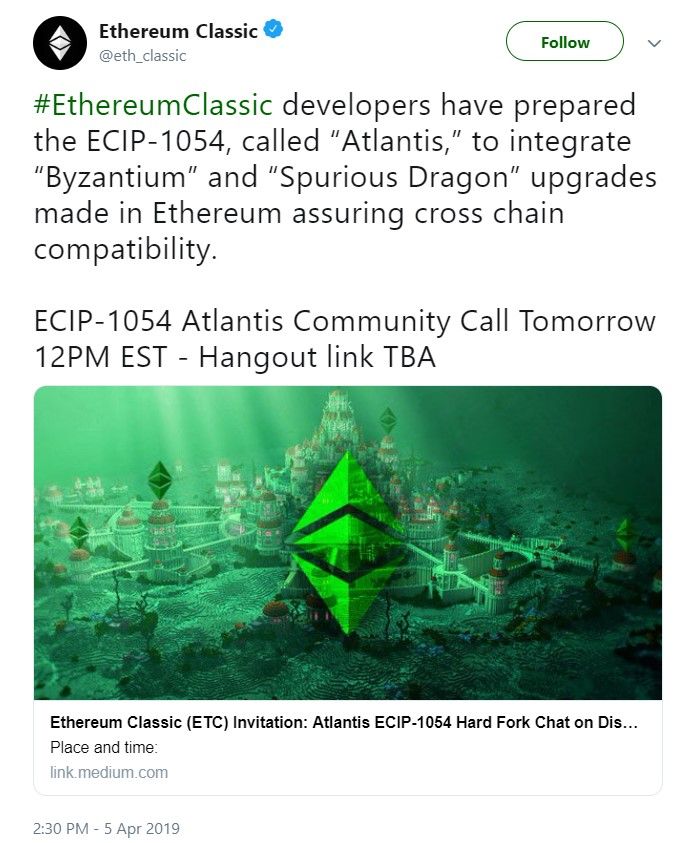 The developers have put forward some serious changes in the ETC network which included:

Ethereum Classic’s development team has proposed six major changes in the upcoming Ethereum classic hard fork which have been set open to discussing amongst the wide community of ETC. The Atlantis hard fork will occur on block number 8,750,000 on the mainnet of ETC.

Additionally, Other Ethereum Classic Improvement Proposals included changing the current Proof-of-Work based algorithm. The developers also discussed the changes that were implemented during the recent Ethereum Constantinople hard fork.

According to the charts, Ethereum Classic price consolidated in the same region before it hits $8 mark after Atlantis. In the last 24 hours of trading, Ethereum Classic has been trading in a wide range between the 200-day MA and the 50-day MA. The increased gap of this range signals to a scenario where the price could be headed for a breakout. If Etheruem Classic breaks out to the upside above the 200-day MA above $8 mark, it would make sense to go long with a target of $10- 12 mark in the near term.

Also, the 100 SMA line is above 200 SMA line, which indicates that the path of least resistance is to the upside. Thus, a bullish pull might be seen in the upcoming days.

On the other hand, if Ethereum Classic (ETC) breaks below the 50-day MA, then it could drop below the $6.41 support level.

Ethereum Classic has strong support near $6.40 and resistance near $8.40 levels.