Ethereum price movement since the last week of September has been sideways. ETHUSD price ranges between $203 and $255. Will a big breakout follow the current sideways move?

Ethereum is currently trading at $226 with $1.3 billion trade volume and $23 billion market capitalization. The second largest Crypto has been sideways since the last week of September. From technical analysis perspective, a breakout is imminent. On the price chart, ETHUSD sideways move since 22nd September has completed a triangle pattern just as in the case with BTCUSD. A breakout is required to confirm where next price is heading. The triangle pattern which has taken more than two weeks to complete, was preceded by a $166-$255 bullish move. This shows the higher likelihood a bullish breakout. 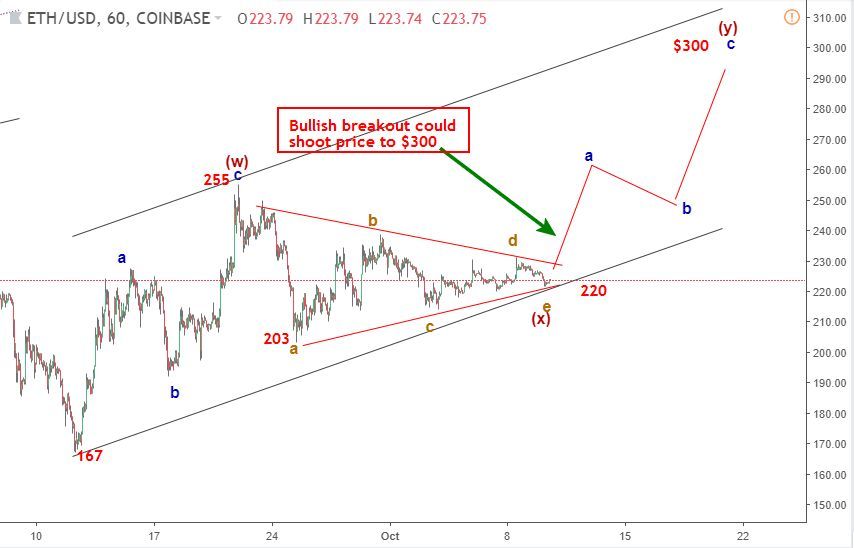 The chart above shows ETHUSD rally from 167 which is clearly corrective. Price completed a zigzag pattern from 167 to 255 in September. It was expected to drop far below 167 if the bullish correction ended at 255. Instead, price became silent and went sideways for more than 2 weeks. The sideway move between 255 and 220 has the height of 52 when price hit the pattern low at 203 on 22nd September. The breakout is expected to be bullish. If price moves as expected, it will hit between $280 and $300 . If the breakout happens downside (this is less likely) price could hit 203 and even break below 167.

Do you have other views in contrast to the ones listed or you want to compliment them further? letÃ¢â‚¬â„¢s know by your comment below. DonÃ¢â‚¬â„¢t forget to share this analysis with people that matter to you.