Ethereum has fallen back under pressure after it couldn’t sustain last week rally to $140.

March 26, 2019. AtoZ Markets – Ethereum dropped to 132 on Monday from last week’s 140. The cryptocurrency is now heading to 130 where it could be supported on the short-term. In the first half of this month, the second largest crypto on coinmarketcap was supported thrice at 130 but the resulting rally to 140 last week was met with much resistance from the bears.

Ethereum has followed the current crypto recovery phase since December when it bottomed at $82. Whether the bottom is temporary or not, remains to be seen. Since mid-December, Ethereum gained almost $90, more than 100%, to hit $170 late February. The current recovery looks corrective and if price patterns on the chart are anything to consider, the cryptos could follow with one more leg downside to make new lows. The price patterns on Ethereum supports the bearish outlook much more.

Ethereum co-founder Vitalik Buterin has been in the news this month. Not quite long ago, he emphasized on the need for high Ether prices to keep the network stable. He said that higher prices will be good for security and enhance a better ecosystem. He advised fellow developers in the industry to abstain from any deeds that would sink crypto prices.

Lately, he had a heated argument with Tron’s Justin Sun where the latter promised to erect a monument of Ethereum and Vitalik for his tremendous contribution to the industry as a pioneer. Vitalik responded with the assurance that Ethereum will always be ahead of Tron and he ”will lose certain hope in humanity if Tron usurps”

This week, he was also part of a podcast with ETHHUB’s Into the Ether podcast where he discussed the current and future state of Ethereum, his leadership role and topics like Ethereum governance process, Eth1.x and Ethereum 2.0. 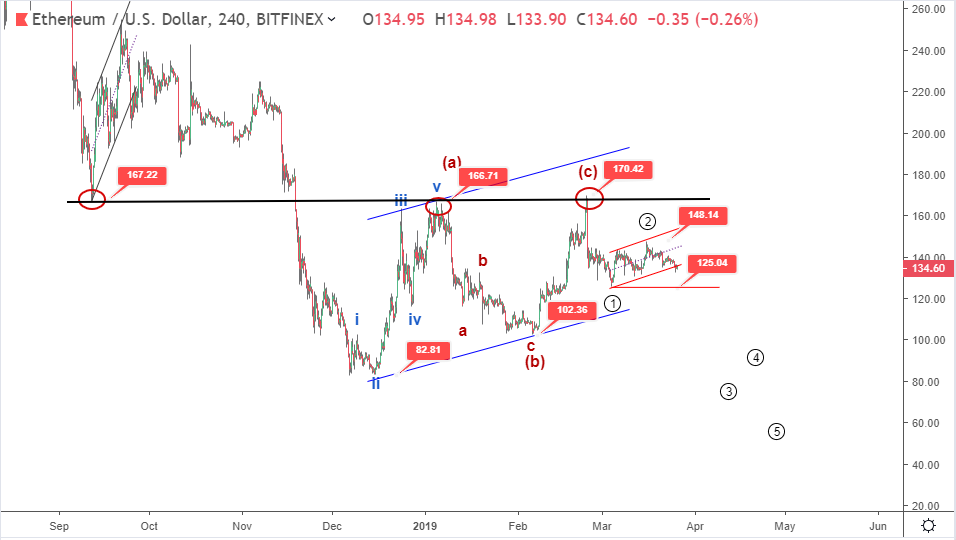 The chart above shows price under a very strong resistance zone at 165-170. Prior to the November 2018 bearish breakout, Ethereum’s 2018 low was at 167. Price has tested this price level twice in early January and late February but has failed to break above. With a potential 82-to-170 zigzag corrective pattern ending with a double top at the strong 166-170 resistance zone. The bears might win again and push the price to a new low especially if March 3 low of 125 is broken downside. The bulls will need a strong trigger to push above 170 to win back the race in the short term.

Tags Cryptocurrrency Ethereum Ethereum price forecast Vitalik Buterin
Forex Crypto
Top 5 Forex Brokers
Top 5 Crypto Exchanges
Your subscription could not be saved. Please try again.
Thank you for subscribing. You will be the first to receive all the latest news, updates, and exclusive advice from the AtoZ Markets experts.
Everyone is reading
Is Forex Trading Halal or Haram in Islam?
Top 5 cryptocurrencies 2021 | Best Cryptocurrency To Invest
How to Setup Monero Mining in 2021?
close ×