The second most-valued cryptocurrency after Bitcoin (BTC), has hit a major milestone amid the ongoing price rally.

May 12, 2021, | AtoZ Markets - The second most-valued cryptocurrency after Bitcoin (BTC), has hit a major milestone amid the ongoing price rally. Ethereum has set a new historical record in its capitalization, reaching a figure of 500 billion dollars.

Today, Ether’s price set another historic record, surging to as high as $4,346, according to data from CoinMarketCap, and market capitalization briefly surpassed $500 billion, reaching nearly $505 billion at investor transactions.

The new record allows Ether to be considered as now larger than payments giant Visa or major investment bank JPMorgan in terms of market capitalization.

Ether is the second cryptocurrency to hit a $500-billion market cap after Bitcoin, and took significantly less time to become a half-a-trillion-dollar asset. 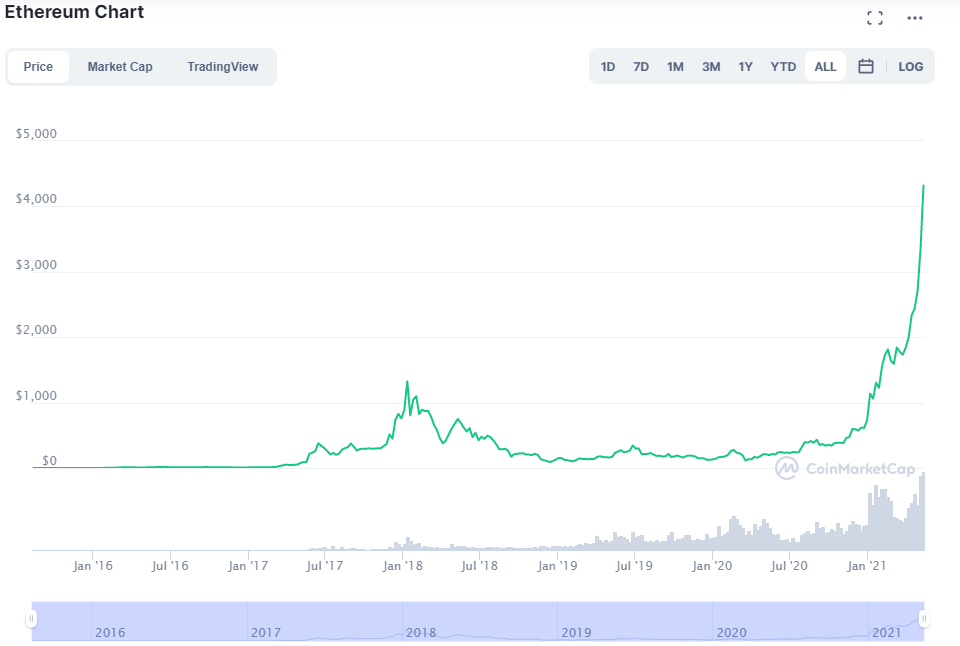 Some crypto analyst believes that Ether is now on track to hit a price target between $8,000 and $10,000 by late 2021, based on the exponential growth that has been presented in recent months.

We can't forget that Vitalik Buterin, the Ethereum creator, became a billionaire after Ether’s price rose above $ 3,000, something that happened on May 3.

Ethereum was first described in a 2013 whitepaper by Vitalik Buterin who, along with other co-founders, obtained funding for the project in a public online sale in the summer of 2014, to finally officially launch this blockchain on 30th of December. July 2015.

It is a decentralized open source blockchain system that features its own cryptocurrency, Ether (ETH) and works as a platform for many other cryptocurrencies

The second virtual currency most desired by investors has several advantages over its competitors, among them that to mine Ethereum you only need a standard computer, and its only limitation is that it cannot produce more than 18,000 per year per person, however It is currently estimated that there are more than 112 million coins in circulation.

The cryptocurrency acts as a fuel that allows smart contracts to run unlike bitcoin, which is meant to be a unit of currency on a peer-to-peer payment network.

A majority of decentralized applications are based on Ethereum and the cryptocurrency accounts for the highest percentage of the total funds staked in the DeFi projects.