The Deutsche Bank whistleblower, Eric Ben-Artzi has declined his share of a $16.5 million SEC award. What were his motives to decline such a large amount?

19 August AtoZ Forex – The case involves the third largest whistleblower award in the history of the US Securities and Exchange Commission (SEC) program. The former Deutsche Bank Risk Officer, Eric Ben-Artzi provided insightful information, which exposed the securities law violations of the bank. Eventually, his information led to the fine of $55 million on Deutsche Bank last year.

Based on his deeds, Eric Ben-Artzi was entitled to receive $8.25 million from the SEC awards that totals $16.5 million. Unexpectedly, the former Deutsche Bank Risk Officer has told the SEC yesterday that he is unable to accept this award. Eric Ben-Artzi

Who else were entitled to the SEC reward?

The SEC discovered that at the height of the 2008 financial crisis, Deutsche Bank falsely stated its accounts through incorrectly valuing a leading derivatives position. Throughout the investigation, SEC received several claims, but not all of them were valid.

From the applicants, the information gathered of Eric Ben Artzi and Matt Simpson were leading to solve the case. Hence, both the Deutsche Bank risk office and trader, are eligible to receive each $8.25 million.

Reasons for the Deutsche Bank whistleblower to decline reward 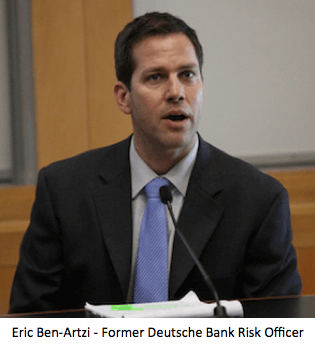 One of the reasons why Eric Ben-Artzi rejected the award, deals with the fact that the top executives were not fined. Many of these executives are now retired and they are still in possession of their illicit multi-million bonuses. Revealing more about the case, he said that the revolving door of personnel between SEC and Deutsche Bank left these executives unpunished:

“In this case, top SEC lawyers had held senior posts at the bank, moving in and out of top positions at the SEC even as the investigations into malfeasance at Deutsche Bank were ongoing. This goes beyond the typical revolving-door story.”

It is due to the SEC’s failure to discipline these alleged executives, Eric Ben-Artzi turned down the $8.25 million SEC reward as a protest. The remarkable case is believed to be the first time that a whistleblower refused a reward, since the program’s inception in 2011.

Would you decline such a large amount, and stick to your ethics? Let us know in the comments section below.