May 28, 2019, | AtoZ Markets – On 2 June 2018, Cayman Islands company Block.one, released v1.0 of EOSIO software, the blockchain protocol software that is used to run the EOS coin’s network. As we get closer to June 1, the one-year anniversary of this event and the date for a major announcement by Block.one, there are hints by the EOS Founder that they are planning to launch an EOS-powered social network. However, there is no such evidence for the “big announcement” which will be in front of us on June 1.

The recent EOS price action which is now holding the world’s fifth most valuable cryptocurrency by market cap. At press time, EOS has a market of $7.99 Billion according to coinmarketcap stats. 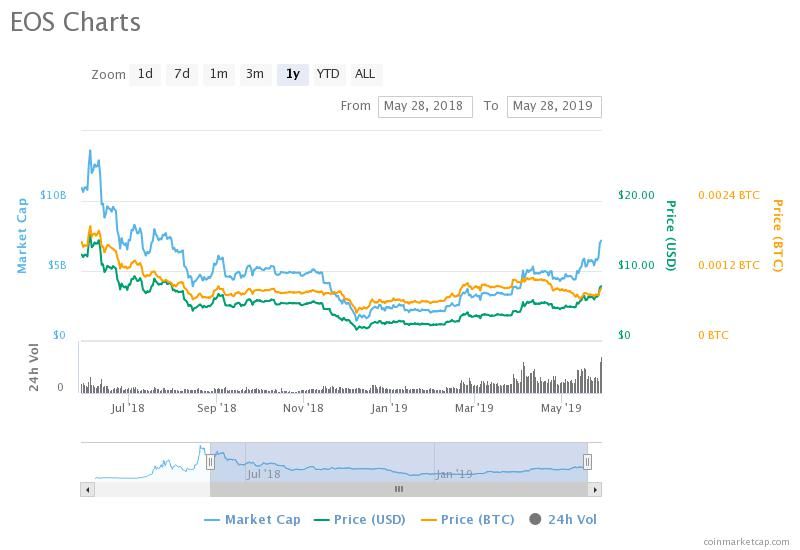 Looking at the technical analysis, the current price of EOS is not the peak, and EOS has the strength to grow furthermore.  However, after today’s EOS price rise, the price is likely to be adjusted to the previous support level at $7.50 level.

EOS Founder, Dan Larimer, is highly optimistic on his project and says the biggest announcement since EOSIO is coming up in June. Dan has been hinting that it will be the ‘big announcement’ since March and has been hyping it up in the EOS’ Telegram group. EOS coin price rise is due to Block.one, the blockchain development company which have been developing EOSIO software since last few years.

Also, According to various sources, the firm is now planning to buy back 10% of its shares, indicating that the company has a positive viewpoint on EOS coin and is investing in anticipation of the big EOS announcement.

Therefore, since the company is buying back these shares at such a high price, they must anticipate even more growth in the future, perhaps after the EOS announcement in June.

Moreover, the first time Block.one has repurchased a portion of its shares. The company reportedly repurchased 13.8% of its shares at $1,200 per share, costing them $300 million. Therefore, Block.one either believes they will grow more than other investment opportunities or wants to consolidate their ownership.

SEC Vs. Ripple Lawsuit Scheduled for August 31st - Will XRP price be affected?