March 4, 2019, | AtoZ Markets - Elon Musk usually avoided any topic related to bitcoin or blockchain. Although there already have been several encounters between Space X and Tesla CEO and cryptocurrency. Atoz markets tried to find out how Elon Musk relationship with cryptocurrency changed and how it evolved since 2014 when he made the first public comments about Bitcoin.

In October 2014 Elon Musk during one of his interviews with Walter Isaacson on stage at Vanity Fair's New Establishment Summit said that “bitcoin is probably a good thing”. He added: ”I think it's primarily going to be a means of doing illegal transactions. But that's not necessarily entirely bad. You know, some things maybe shouldn't be illegal." At that time, according to the entrepreneur, he did not own any bitcoins.

2017: Elon Musk denies the theory of him being bitcoin creator

November 2017 almost two years passed after the first possible bitcoin founder in the face of Chief scientist of nChain Craig Wright appeared. On November 22, Sahil Gupta, who positioned himself as a former SpaceX intern, published an article in which he suggested that Elon Mask could be Satoshi Nakamoto, the original creator of Bitcoin. Gupta justified his conclusion with the following arguments:

Tesla CEO in his turn denied any rumors about him being Satoshi in his tweeter by saying “is not true.” The SpaceX CEO added, however, that he now had “part of BTC” that his friend sent him a few years ago.

December 22, 2017, Musk responses to Neeraj K. Agrawal, an employee of a nonprofit crypto research institution. In his tweeter, K. Agrawal asked Musk whether he created Bitcoin, to which the tech magnate replied that he “never heard of it.” The same month, Tesla CEO also revealed that he used to mine bitcoins using his car’s supercharger, placing a shaft installation in the trunk.

In January 2018, during the cryptocurrency hype, SpaceX CEO decided to promote a flamethrower released by his tunnel construction firm, the Boring Company by saying: “The flamethrower is sentient, its safe word is ‘cryptocurrency’ and it comes with a free blockchain.”

Last February, the fraudulent activity on Twitter was revealed. Elon Musk and Donald Trump impersonators tried to deceive Twitter users to send them cryptocurrency. SpaceX CEO responding to one of the tweets asking why such spam was so common, said that he had already contacted Twitter CEO Jack Dorsey on this issue. Just a few days before Musk twitter, Amazon Web Service (AWS) software container from Tesla was hacked by the crypto jackers. As the media reports, the fraudsters gained access to AWS Tesla access credentials by entering a Kubernetes software container that is not password protected. They then used this container to mine bitcoins for an unknown period of time.

In March 2018 Musk was spotted in the Southwest Festival holding a book called “Cryptocurrency simply explained.” 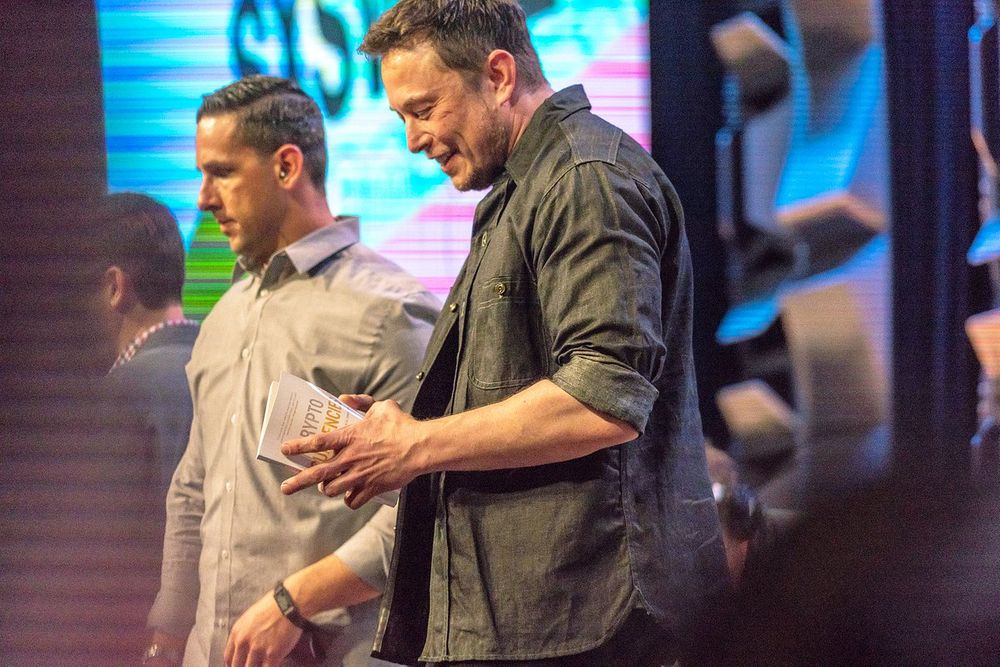 The entrepreneur allegedly took one item from the crowd to sign. According to the author of the book, Julian Hall, Musk kept the book.

October 2018 after a joke about selling bitcoins Musk was banned on Twitter “because of some automatic rule against selling Bitcoin or something like that,” as Tesla CEO later explained. Tesla's CEO provoked rumors about his company's participation in cryptocurrencies by publishing a tweet that said: “Do you want to buy bitcoins?” Mask later confirmed that he was “just kidding.” During the podcast organized by advisory services firm ARK Invest, he said: “Bitcoins and fraudsters from Ethereum were so prevalent on Twitter that I decided to join and said that one day I want to buy bitcoin?”

November 2018: The British news agency reported that fraudsters stole 120,000 euros (about $ 157,000), posing as Musk and advertising a fake cryptocurrency newsletter on Twitter. In particular, the hackers broke into Twitter accounts of clothing retailer Matalan and Pathé UK, the British division of the French director, and posted messages that promoted bitcoin distribution. The message says that Musk leaves Tesla and distributes free bitcoin they advised subscribers to send a small number of bitcoins to the specified wallet address and promised a much larger amount in return. As the media reports, more than 300 people had fallen victim to the scam.

February 2019: In February 2019 Elon said in one of his latest radio interviews with ARK “it would be wrong to use Tesla resources to participate in cryptography. We are just really trying to accelerate the promotion of sustainable energy.” At the same time, the South African entrepreneur called the bitcoin structure “pretty brilliant,” adding that digital currency is “a much better way to transfer value than paperwork.”