After yesterday’s FOMC meeting, Euro dropped below 1.1535 intraday support to hit the 1.15 important technical handle. Will price break below 1.15 significantly to make a new low below 1.143?

October 2018 | AtoZMarkets – Yesterday, before the FOMC meeting, Euro was playing around the 1.1535 intraday support level. It dropped to 1.1535 after being rejected at 1.1610 resistance level. The EU conference that started yesterday continues today. Global economic issues which include Brexit and the general Eurozone economic conditions will be discussed. The market will pick any statement more hawkish or dovish than already expected. If EURUSD continues digging, the next price level to watch out for is 1.143. The market seems to favor the bearish run from a technical perspective after yesterday’s breakout completed a double top pattern.

In yesterday’s update, we expected the dip to be limited depending on how price reacts at 1.15. A substantial bridge below 1.15 will see Euro surrenders to the bearish pressure. A bridge below 1.143 is much possible.

The forecast above still stays valid as price broke below 1.15, but marginally. A more likely scenario is shown below with price pointing downside after the completion of a double top reversal pattern. 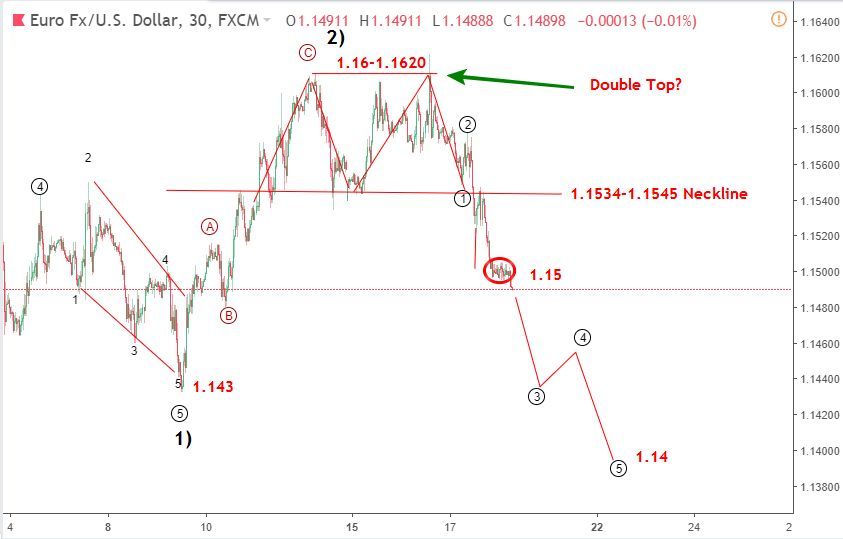 The chart above shows the corrective version of the rally from 1.143 to 1.1610 and a double top pattern topping at 1.16-1.1620. Price broke below the pattern neckline at 1.1535-1.1545 conveniently with a bit of consolidation before it finally drop to 1.15. Price is currently breaking below 1.15 quite easily – easier than expected. This shows that the bullish correction probably has ended at 1.16-1.1620 and price is heading to 1.143 and 1.14. Unless the bulls hijack the move to take it back above the pattern neckline at 1.1535-1.1545, the bears will most likely take control till the end of the week bar any surprise from the ongoing EU summit.