May 13, 2019, | AtoZ Markets – eBay to start accepting crypto? Photos have leaked from the ongoing Consensus 2019 conference, which might be suggesting that eBay, will soon make a foray into the cryptocurrency arena in what would be a major mainstream breakthrough. Should this be true, it could open up cryptocurrencies to 180 million active buyers and will give cryptocurrency a major push towards global adoption. 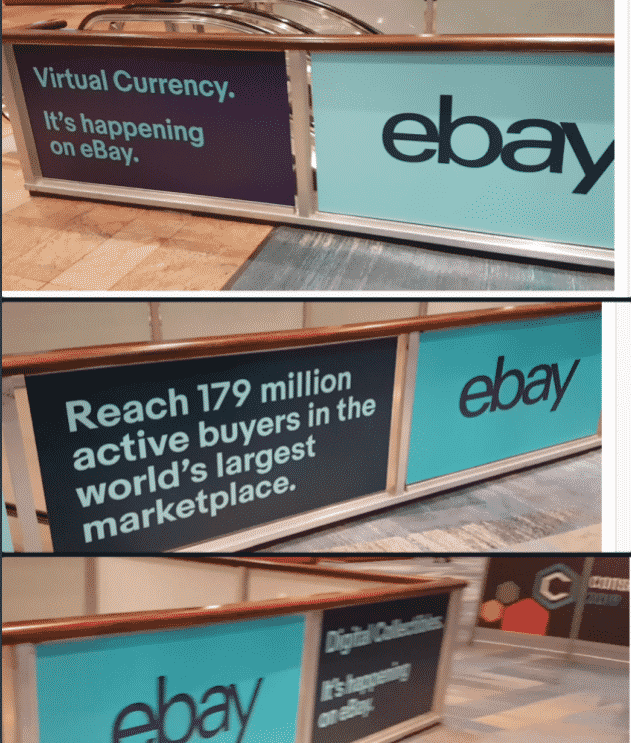 These advert photos, which were first leaked on Telegram channel @PatronsOfTheMoon, have sparked massive speculation on Twitter. Nevertheless, this could be fake news as it is yet to be to confirmed by the company. That being the case, the pictures featured in the tweets above could be about a totally different thing. “Virtual Currency. It’s happening on eBay” – this could be in reference to the category titled ‘Virtual Currency’ that allows platform users to trade crypto against fiat anonymously.

The reason behind eBay Crypto speculation

While eBay is yet to be an official statement on its crypto plans, this recent development has been widely linked to Bitcoin payment service UTRUST. Some in the crypto sphere are pointing to the fact that a former executive of PayPal and eBay, Sanja Kon, already works for the UTRUST  back in 2018 and is in charge of Global Partnerships. Quite possibly that Kon would try to get eBay as a strategic partner.

Just recently, Kon worked as Head of Marketplaces and Large Enterprise Partnerships at PayPal and before that she had spent five years working for eBay. Therefore, a partnership between UTRUST and eBay would be a logical conclusion to reach.

Two years ago, the Senior VP for eBay, Scott Cutler, shared with Yahoo Finance that the e-commerce giant is mulling starting to accept Bitcoin for its goods. Last week, the CFO of PayPal publicly said that it is too early for PayPal to start using BTC transactions due to the high volatility of the market.

Besides, he added that the top management team is more excited by blockchain itself rather than Bitcoin.

“We have teams working on blockchain and cryptocurrency as well, and we want to take part in that in whatever form that takes in the future – I just think it’s a little early on right now,”

eBay is one of the sponsors of the forthcoming Consensus conference which began on Monday, May 13, 2019, in New York. Along with eBay, the event will be sponsored by such companies as ConsenSys, Ledger, Tron, Microsoft, BitGo, and others. The attendees would mostly comprise of developers and investors. Whatever the case may be, an official announcement can be expected to be rolled out before the event ends on May 15.

What do you think about eBay potentially accepting cryptocurrency? Let us know in the comments below!