2 August 2019 | SQUARED DIRECT – US indices posted sharp declines on Thursday to reverse early session gains as President Trump dealt markets a mighty blow with his plan to impose new tariffs on China. The news suggests that trade negotiations haven’t been constructive and the trade war should extend.

This would mark a period of risk-off sentiment for US markets as uncertainty hangs over US-China trade relations and future monetary policy. In terms of data, there wasn’t much support as the US manufacturing PMI figure slipped to 51.2 in July while jobless claims rose slightly above expectations. Today the US releases factory orders data and its monthly jobs report which includes the non-farm payroll report, unemployment rate, and wages growth. The data is likely to have a strong influence on the day as positive figures would lessen the likelihood of further monetary policy easing and may weigh on US equities. 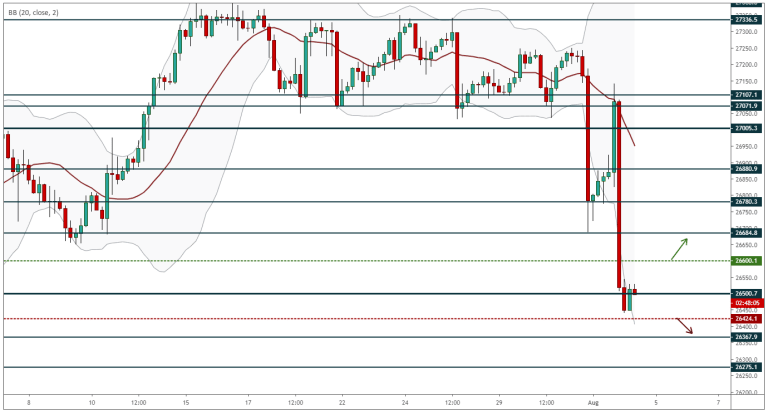 Dow Jones Volatility Increased Over $34,400 Price Area - Bulls To Regain Momentum?
Forex Crypto
Top 5 Forex Brokers
Top 5 Crypto Exchanges
Your subscription could not be saved. Please try again.
Thank you for subscribing. You will be the first to receive all the latest news, updates, and exclusive advice from the AtoZ Markets experts.
Everyone is reading
Ripple Lawyers Object SEC’s Request to Extend Discovery Deadline
SEC Lawsuit Against Ripple May Drag On Until 2022
Ethereum Sustains Below $2,500 Psychological Area - Bears to Push the Price Downside?
close ×