The Dow recovers slightly higher to end at 26029 on Tuesday. Has the price of the index bottomed in its wider bullish trend?

7 August 2019 | SQUARED DIRECT – US indices managed to post a slight recovery on Tuesday following Monday’s steep sell-off as US-China trade headlines provided some relief. A US trade official reassured market participants that the two nations would still plan to meet and negotiate despite the recent escalations in the trade dispute.

Moreover, following its decision to devalue its currency, China took steps to limit the declines and steady the value of its currency against the dollar. This improved sentiment for the day, however, the risk-off environment should still hold as global trade uncertainty persists. In terms of data, US JOLT job openings came in lower than expected however left no influence. There are no major economic releases for the day, and markets should rely on news-driven momentum to direct the Dow.

The Dow traded 1.21% higher to end at 26029 on Tuesday. The price managed to bounce off its intra-day low of 25024 and traded through 25760 level towards the 20-period MA. We have yet to confirm whether the Dow has bottomed in its wider bullish trend.

The price has formed a higher low while the daily RSI reading has formed a lower low indicating underlying strength within this retracement which could point towards further upside. 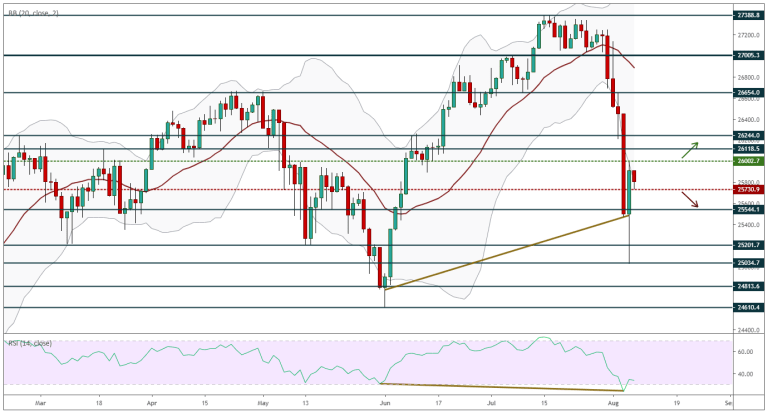