19 November, AtoZForex.com, London – The October FOMC meeting minutes did little to change the underlying Fed outlook, supporting market consensus that the Fed will increase interest rates in December, providing no adverse affects for the outlook, and that the pace of tightening is likely to be gradual. However, following the release, markets have reacted counter-intuitively.

Don’t be fooled by decline in USD

The USD has weakened across the board after the minutes, with EURUSD squeezing above 1.07 level. BNP Paribas has acknowledge the move, noting that:

“we think this is probably driven by profit taking, and, given light long USD positioning is not likely to persist.” 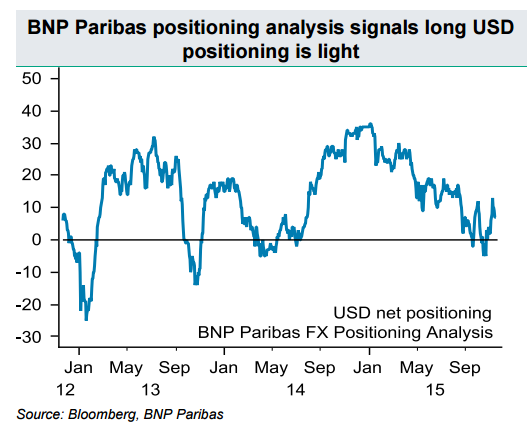 Moreover, according to Bank of America Merrill Lynch, the market had increased the probability of a December rate hike to over 80% since the October FOMC, resulting in broad USD rally thereafter. In the meantime we also had much better than expected Non-Farm Payrolls report, and a range of Fed speakers.

As such, given the wast increase in USD longs, “some of the dovish elements discussed above may have spooked a few,” argued Bank of America. Nevertheless, “the minutes were balanced in our view, and given they suggest the core of the FOMC see December as likely assuming data come in line, are still USD-supportive,” Bank of America Merrill Lynch added.

As questions on the first rate hike timing become less pressing, the focus should now fall on the pace of the tightening.

Also, while the outlook for USD was not featured prominently in the October minutes, “we think the pace of USD gains is likely to be an important input into the pace of hikes,” BNPP argues.

Though for a more significant USD rally, we would require a new catalyst. The most relevant ones are the ECB meeting on 3rd of December and NovemberUS payrolls report the day after. Until then we could expect the USD to consolidate.