The Dollar index underlines the rallying strength of the US economy with a 5 year peak. Amid concern of a rate hike in December, how is the bullish run expected to fair? Are we to expect a correction? Our Dollar index Elliott wave analysis may have some clues.

30 November, AtoZForex – The US dollar index is the most widely recognized and publicly traded currency index. It is the measure of the US dollar relative to a basket of foreign currencies.  The Dollar index has been bullish since 2011 and there are concerns as to when the run will be over. One of the tools we can use to get a clear picture is the Elliott wave theory. Based on our Dollar index Elliott wave analysis, it seems the bullish trend is stretched. A possible correction is expect soon. Likely to be triggered by the December interest rate report. Markets expect a rate hike but any decision by the Federal reserve to stagnate it will result in a bearish correction that will last till the year end. Often many time technical analysis is a leading indicator for future price forecast of an instrument.

The weekly chart below shows the rally from 2011. 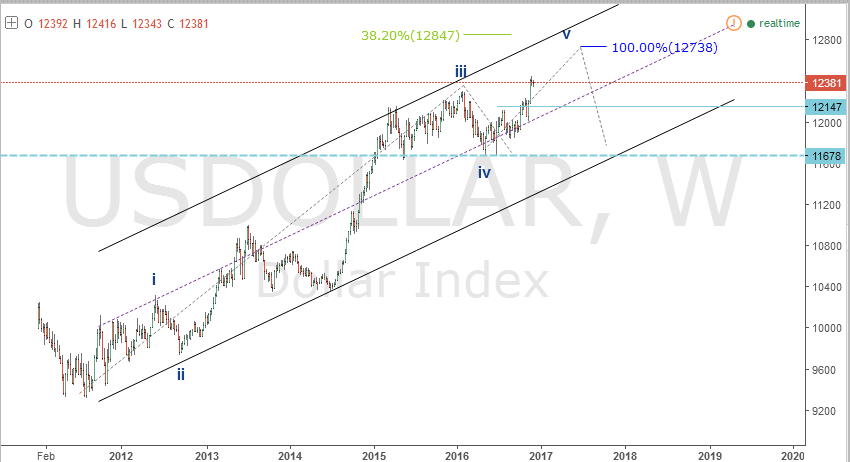 The rally from 2011 is exhibiting the properties of a classic impulse wave. With wave 3 and 4 completed, it looks like the 5th wave is in motion. The  projected levels for wave 5 are 1273 and 1284. The long term bullish strength is expected to continue until the first quarter of 2017.  We may start seeing a real bearish retracement mid-2017. The will trigger for this is unknown currently. With the NFP on Friday and an interest rate decision next month, our attention should be on the near term possibilities.

There is a good probability that a dip is imminent. The 4th sub-wave of wave 5 is just starting. The Dollar index Elliott wave analysis shown in the chart below displays a corrective dip expectation. 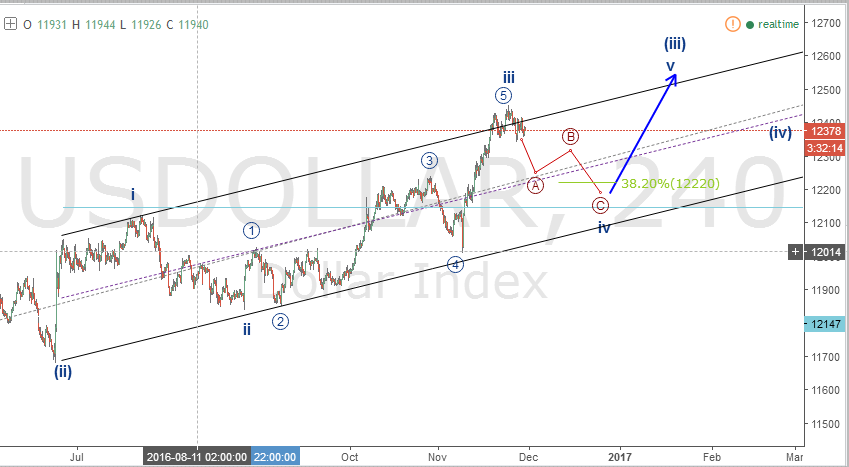 The aforementioned dip could extend downward to 1222 and last throughout December and early January 2017.

In contrast, price may continue further to the upside. Especially if the Federal reserve meet up with the rate hike expectation in December. The resultant rally is expected to be limited, with price correction to the downside. It seems that’s what it wants to do next.