After months of negotiations, today, the 14 OPEC members agreed on a historic OPEC oil cut deal. How many barrels will each OPEC member cut from their production? Also, will was there a consensus on the non-OPEC members?

30 November, AtoZForex – A record of achieving co-ordinated action since 2008 is achieved. A historic OPEC oil cut deal has been agreed on today. OPEC’s president Mohammed Bin Saleh Al-Safa of Qatar declares that the group made a great success today. As OPEC agreed on the scenario outlined in Algeria, which was the meeting when the cartel agreed on the production cut principles.

OPEC’s President said that with the co-operation and understating of all member companies, they were able to reach an agreement today. He added that the agreement comes from the responsibility of OPEC member and non-OPEC member companies to rebalance the market needs. Hence, it requires courageous actions from OPEC and also support from other countries. On the drop of the news, global oil prices increased almost by 8 percent with Brent crude increasing from $46 per barrel to $50 per barrel.

The breakthrough comes after months of on-and-off-again negotiations that made many traders doubt reaching an agreement. Today, Mohammed Bin Saleh Al-Sada confirms that the agreement has been set that OPEC will reduce output by 1.2m barrels per day. Hence, this will lower its total output to 32.5m per day and it will be effective starting January 2017. The agreed reduction represents approximately 1 percent of global production.

Moreover, the Secretary General of OPEC has revealed the details of cuts by each OPEC country. Topping the list of the highest reduction level, Saudi Arabia will have to cut 486,000 barrels per day. Second on the list is Iraq, this OPEC member will reduce oil production by 200,000 barrels per day. Below, you can see the list of agreed productions and levels for each OPEC member. 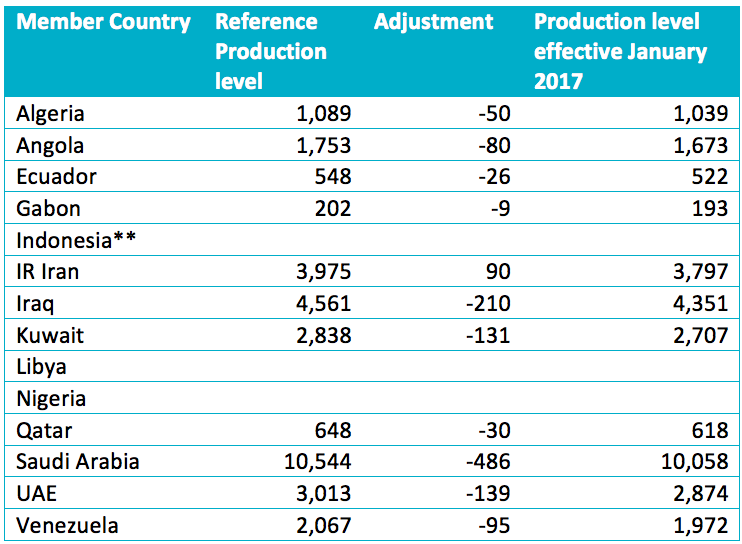 What does the deal mean for Non-OPEC members?

According to OPEC’s President, Mohammed Bin Saleh Al-Sada, today’s agreement is seeking for non-OPEC members to cut production by 600,000 p/d.

Also, he stated that the target is achievable and modest. He added that Russia agreed to reduce oil production by 300,000 b/d.

The historic OPEC oil cut deal sees the exemption of Indonesia from the agreement. Because as a net oil importer, Indonesia will suffer to support today’s deal. Therefore, OPEC President confirms that Indonesia asked to suspend its OPEC membership.

In conclusion, OPEC president stated that this is a “major step forward and historic agreement”. This agreement would help rebalance the market and reduce the overhang of excess oil supplies.