6 January, AtoZForex – Today, the US Bureau of Labor Statistics will publish its monthly report on the change in the number of employed people during the previous month, or in other words, Non-Farm Employment Change report.

Traders always closely eye this report, as NFP is a vital economic data, which comes shortly after the end of the month. This way, market participants have an idea of further economy direction. November NFP report showed the following:

For December figures, market consensus stands at 175K, with an unemployment rate at 4.7% and the average hourly earnings increase of 0.3%. Moreover, yesterday’s ADP private sector employment data emerged at 153K versus the forecast of 170K. Some perceive ADP report as a kind of NFP report prediction. ISM nonmanufacturing data also demonstrated weakness in the employment component.

Prior to today’s release, Asian stock markets are trading are headed lower so far. Ian Lyngen, head of US rate strategy at BMO, has stated:

“The Treasury market is pricing in a disappointing number, versus the consensus. If we get a 170,000 nonfarm payrolls or higher, that will be a negative for the Treasury market, and we’ll get a relatively quick reversal of this bid.”

Experts from Goldman Sachs shared their views on today’s US NFP report expectations. They believe that the change in the number of employed people during December will appear at 180K. Moreover, Goldman sees unemployment rate coming at 4, 7% with average hourly earnings at 0,3% m/m and 2.8% y/y.

The bank stated that their outlook for stable payroll gains mirrors encouraging market surveys. Also, they believe that there is an uptrend in the transportation industry.

The head of FMR at Rabobank, Michael Every, believes that the trade balance for November will have “a whopping deficit”. Moreover, he stated that the NFP is the consensus of 175K. Rabobank sees the average earnings component potentially bringing an upside surprise from 2.8% y/y.

What is Non-Farm Payroll (NFP)?

The Non-Farm payroll economic data is compiled and published by the Bureau of Labor Statistics (BLS). Non-farm payroll data is an important monthly employment summary from the BLS and used as one of many indicators used to gauge the overall health of the economy. Non-farm payroll consists of the total number of US workers that receive some sort of a wage, excluding the following groups:

The Non-farm payroll data takes into account of approximately 80-85% of all workers in the United States.

What currency pair to trade?

If you decide to trade the NFP, the pair to trade would be USDJPY. Currently, the sentiment is on the bearish side following yesterday’s ADP data. With USD initially popping to the upside then deflating to the downside like a balloon. As observed on the hourly chart. 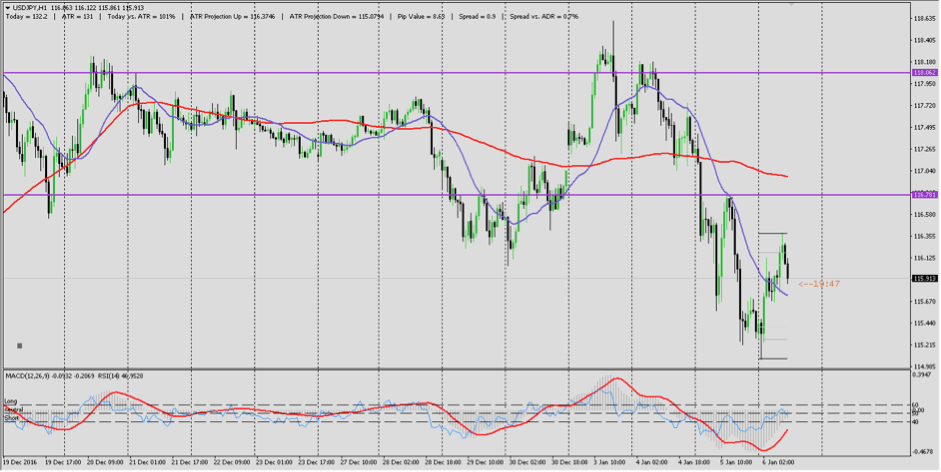 Trading Doc, the market analyst at AtoZForex has commented:

Currently, the price is sandwich between the two simple moving averages (20 &100). MACD below the zero line and sloping up and RSI is in the neutral zone.

Prior to NFP, we could see price test the 115.50 level before reversing to the upside following the NFP data to test price at 117.00 level.  Please note this is not a recommendation.