15 December, AtoZForex – Oil prices rebalanced on Thursday as tighter market loomed in 2017. The planned production cuts by OPEC and Russia have impacted the expectations for the market.

Moreover, yesterday’s decision by the Federal Reserve (Fed) in the US to raise the interest rates by 25bp to 0.75 % has pushed investors out of commodities. 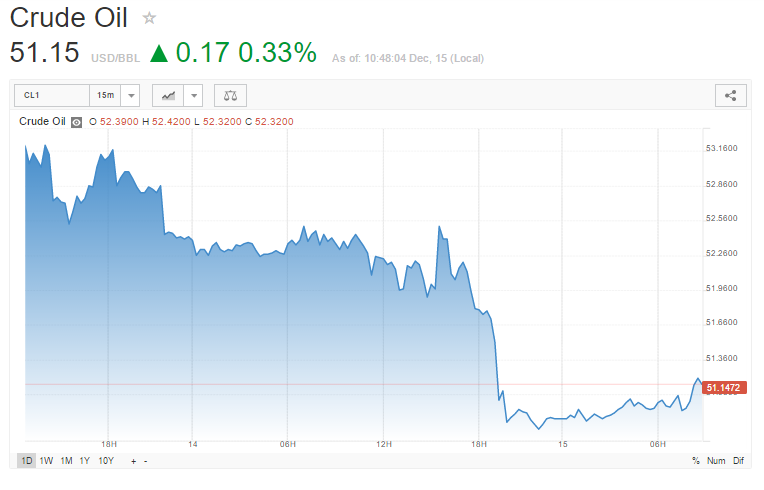 Australia and New Zealand Banking Group has stated the oil markets would shift to a substantial deficit in 2017 Q1 in case the Organization of the Petroleum Exporting Countries (OPEC) and other producers led by Russia implement the planned cuts. The agreed total cut is accounting for 1.8 barrel per day (bpd). The banking group has added:

“This will likely push oil prices well above $60 per barrel early next year.”

Additionally, traders stated it is still uncertain whether OPEC and other oil producers will commit to their promises. Yet, a tighter market will be resulting from years of dropping investment into new production. The operators cut the costs to survive the low-price competition. The Vice President for Oilfield Service Research at Rystad Energy, Audun Martinsen, has stated:

“2017 will be the third year investments go down, with 3 percent (declines). You need to go back to the 80s to see three consecutive years of investment cuts.”

Today’s steady prices came in the wake of sharp drops on Wednesday, when crude oil declined almost 3 percent on the firm USD. The US dollar has advanced close to 14-years highs versus a basket of six major currencies, as the Fed projected three rate hikes in 2017.

Tags December Fed rate hike oil prices OPEC
Disclaimer: The views and opinions expressed in this article are solely those of the author and do not reflect the official policy or position of AtoZ Markets.com, nor should they be attributed to AtoZMarkets.