Following the SegWit2x upgrade cancellation, DASH Price Hits All-time High. Investors turn attention to the altcoin, making it the 6th biggest cryptocurrency in terms of the market cap. What is next for DASH?

14 November, AtoZForex – One of the altcoins, DigitalCash (DASH) has reached new highs this week. DASH has largely advanced its position as investors have shifted their attention to altcoins due to the recent Bitcoin and Bitcoin Cash uncertainty.

The price of the DASH has spiked on Monday, marking a new all-time high near $542. In fact, prices have stabilized around $400 shortly after the spike. As of now, the DigitalCash is changing hands at $416. 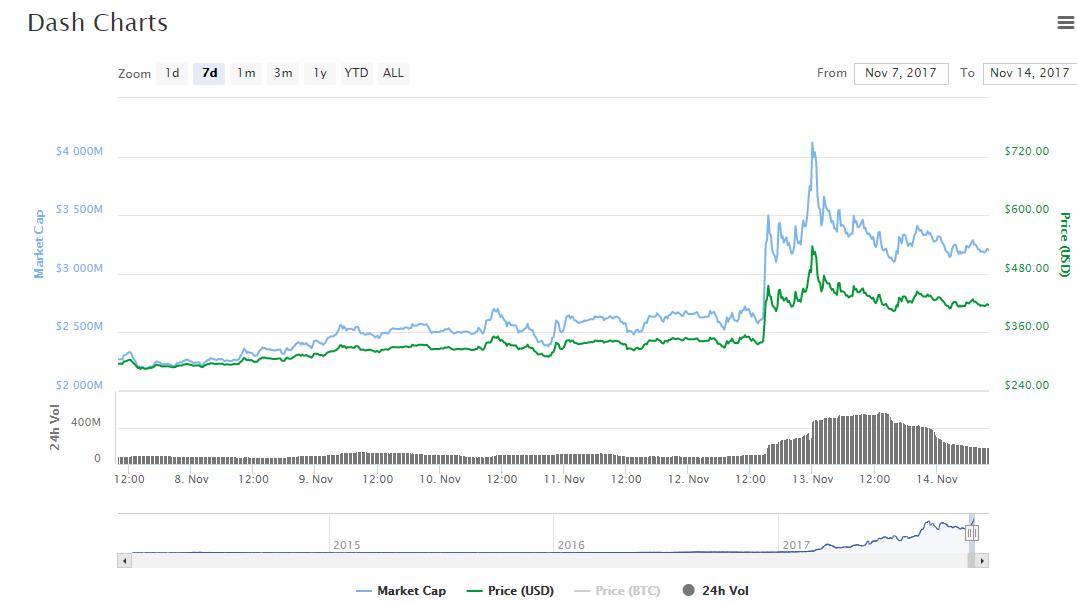 In spite of the correction, DASH has advanced 50% since the 7th of November. Yet, the price action in the course of the past 24 hours has been relatively volatile. DASH Price Hits All-time High, the volumes have exceeded $200 million, according to the data from the CoinMarketCap.

The current market capitalization of the Dash stands at $3.2 million, making it the 6th biggest cryptocurrency in the world in terms of market cap.

During the past week, DASH has been performing pretty stable, while the investors have been concentrating their attention on the aborted SegWit2x event. Following the news, the value of DigitalCash started to move higher and has reached its peak on Monday.

As the Bitcoin network has been fighting over the upgrade, the Dash network has already planned to incorporate the 2MB blocks. The launch of Dash versions 12.2 marks a plan to implement larger blocks soon.

The key aim of the upgrade is to advance widespread adoption of the Dash protocol. Some of the most impressive featured include a 2MB block upgrade. Moreover, Dash network will be able to enjoy a reduction in feed and the release of an HD wallet. The head of Dash Core, Ryan Taylor has stated that the low transaction fees are vital to ensure the long0term success of the project:

“As a payments-focused network, we strongly believe that maintaining low transaction fees is a prerequisite to developing a healthy network over the long term.

High transaction fees affect both consumers and merchants looking to spend the incoming funds. The users of several other networks have experienced firsthand the impact that high fees can have on their daily lives, as many low-value transactions such as pre-paid phone top-ups or gift card purchases are priced out of the mark.”

In addition, many believe that Dash network has a number of advantages over the Bitcoin one. These include greater agreement on scaling and large monthly development budget. This might make Dash more suitable for the public adoption.