UK government lost an important vote last night in the House of Commons, thus proving that PM Theresa May’s position has weakened. Check out the Danske Bank Research: 14 December Market Movers overview for the in-depth analysis of the market.

14 December, Danske Bank –We do not expect the ECB to make any changes to its policy stance or forward guidance at the meeting today. The focus will, therefore, be on news regarding QE composition after the scale down and the updated ECB growth and inflation projections, where we expect the new 2020 forecast to show headline inflation close to the target at 1.8% target, in line with the Governing Council’s growing urge to move on with monetary policy normalisation.

Last night’s Fed meeting turned out rather uneventful. As expected, the Fed hiked the target range to 1.25-1.50% and kept the dot signal broadly unchanged. While two of the dovish FOMC members dissented (Evans and Kashkari), they are losing their voting rights next year. There were also no major changes in the statement. We think the Fed meeting was on the soft side.

While most FOMC participants have incorporated some fiscal stimuli from tax reforms into their forecasts, the dots plot were broadly unchanged, as inflation continues to disappoint the Fed. For more details, please see FOMC review: Broadly unchanged Fed signal, 13 December.

Yields lower, dollar weaker. Taking its cue from the slightly soft outcome of the Fed meeting, as well as core CPI figures that showed a decline to 1.7% y/y (from 1.8%), the yield on 10-year US Treasuries fell by 6bp during the day to 2.34%. Meanwhile, the EUR/USD rose some 0.7% to levels above 1.18.

In the UK, the UK government lost an important vote last night in the House of Commons. Tory rebels backed an amendment, which promised the MPs a ‘meaningful vote’ on the final Brexit deal as suggested by the opposition. While the amendment in itself does not mean much in our view (as it is difficult to say what a ‘meaningful vote’ even means in this situation), it is a reminder that the minority government is weak and PM Theresa May’s position has weakened.

Sweden: Today, the house price indices from KTH-Valueguard’s HOX are released for November, which is likely to attract considerable attention. Our in-house price predictor for tenant-owner flats in Stockholm suggests an accelerating price decline in November, more than 4 % m/m, which would take the overall price decline since August to about 10 %. We view Stockholm flats as a good leading indicator of residential property prices elsewhere in Sweden.

Norway: Like everyone else, we expect Norges Bank to leave its key rate unchanged at 0.5% at the rate-setting meeting today. In its previous monetary policy report in September, the central bank’s projections suggested unchanged interest rates until summer 2019. Since then, the krone has been weaker than expected and oil prices higher, which means the interest rate path will be revised up in the new monetary policy report on Thursday. The combination of a krone more than 2% weaker than Norges Bank assumed in September and (forward) oil prices USD5-6 higher per barrel would, in isolation, push the interest rate path up a good 30bp in 2018 and into

The US fixed income market reacted positively to the Fed ‘dots’ which continue to pencil in three hikes in 2018 and two in 2019. It seems that the market ‘feared’ a more hawkish stance and importantly, Yellen confirmed that most Fed members had factored in fiscal stimuli. Hence, no upside to the ‘dots’ going forward if Trump manages to get his tax reform through. See FOMC review: Broadly unchanged Fed signal, 13 December. All in all, we see no reason to change our view that the US curve will continue to flatten in 2018.

Like the Fed, the ECB should not rock the boat today, with an unchanged policy stance and forward guidance widely expected. The focus will, therefore, be on news regarding QE composition after the scale down and the updated ECB growth and inflation projections, where we expect the new 2020 forecast to show headline inflation close to the target at 1.8%, in line with the Governing Council’s growing urge to move on with monetary policy normalisation.

This morning at 10:00 CET, Norges Bank will give its verdict. While developments since September have been roughly as expect ed, the combination of a weaker NOK and higher oil prices point to an upward adjustment to the rate path, and we look for a 50% probability of a rate hike in 2018. The risk to our view is in fact skewed to the upside, though Norges Bank will probably be cautious about not sending a ‘too hawkish signal’. An upward revision to NB’s interest rate path should trigger a steeper 2019 FRA curve and be NOK positive.

In Sweden, the market should brace itself for another set of soft housing data. We have constructed a housing price indicator, which points at another 4.3% drop after a cumulated 5% decline between August and October.

In terms of the NOK, it’s all about today’s Norges Bank meeting. NB is widely expected to leave rates unchanged and maintain its ‘neutral’ bias, so all focus will be on the revised rate path. Our base case is that the rate path will be lifted to levels suggesting a first 25bp rate hike in Q1 19 (roughly ≈ rate path average reaching 0.75 in Q2 19), i.e. one quarter earlier than in the previous Monetary Policy Report.

While no consensus estimates exist for the rate path, our impression is that consensus is looking for a close to similar upward revision.

Today’s focus for SEK lies on housing data from Valueguard/HOX where our own indicator suggests another 4.3% drop in November, indicating that the housing market is cooling at an accelerating pace. Investors have expressed their negative view on the housing market more through the currency than through rates, and we estimate the housing-premium in EUR/SEK to be roughly 15-20 figures.

Volatility has been rising in EUR/SEK and should continue to be high through year-end. The inflation numbers were a relief for the krona, but we expect another selloff if prices dropped 4-5% in November. Then EUR/SEK could re-challenge the 10.00 level.

EUR/DKK has touched the 7.4430 level over the past couple of days and thus traded towards the top end of the 2017 trading range of 7.4440. We expect the top end of the range to hold and still see value in using an uptick to sell EUR/DKK on 3-6M as a hedge against the combination of a lower DKK net position in Q1 and risk of renewed European political uncertainty ahead of the Italian election in H1 next year.

EUR/USD moved back above the 1.18 mark again yesterday on the back of the FOMC’s dovish hike. FX markets focused on the two dissenters to the rate hike decision and on the fact that even with tax reform effects partially factored in, the longer-term outlook was little changed.

While the market still has a bit of catching up to do when it comes to pricing Fed hikes, the FX market will in our view stay focused on the risk of fewer hikes. Near-term, we stress that upside in EUR/USD should be capped by the elevated pricing of EUR/USD FX forwards over year-end and we continue to see the cross staying within the 1.16-1.20 range in coming weeks. Focus now turns to the ECB meeting where an unchanged policy stance but upward growth/inflation revisions from the ECB should keep EUR/USD ‘afloat’ near term.

EUR/GBP bounced slightly from 0.8790 to 0.8830 last night as the UK government lost an important vote in the House of Commons. As such, the vote should not matter much for markets and EUR/GBP is back at 0.88 this morning. However, the vote underlines the challenges Theresa May’s minority government faces domestically in terms of negotiating Brexit.

Today, the focus will be on the Bank of England meeting, which takes place just before the ECB meeting. After last month’s rate hike, we expect the BoE to stay on hold and maintain a relatively neutral stance in its communication.

The market is pricing in next to a full 25bp rate hike from the BoE in November 2018 and while we still do not expect the BoE to hike next year, we think it is likely that the market will continue to price in a hike in H2 18 in the coming months. Hence, we see relative rates as neutral for EUR/GBP in the near term and still look for the cross to trade within the 0.8650-0.90 range in the coming months 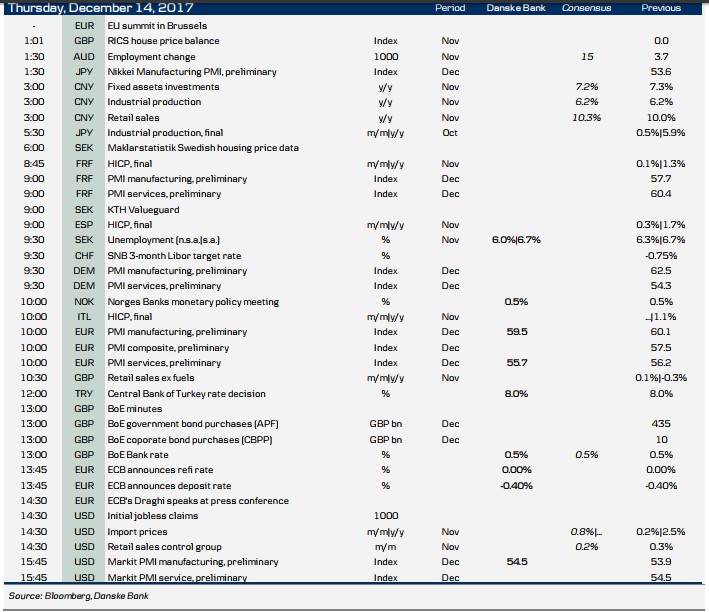 Details on the extent of the regulation by the Financial Conduct Authority and the Prudential Regulation Authority are available from Danske Bank on request. Danske Bank’s research reports are prepared in accordance with the recommendations of the Danish Securities Dealers Association.