Get VIP Trading Signals Market Watch
Trade Now Your capital is at risk.
December 18, 2018 AtoZ Markets – The Cyprus Securities and Exchange Commission (CySEC) has issued a new warning with regard to an unlicensed binary options brokerage companies, which were operating outside its regulatory labels.

In the details of the news as the Cypriot regulator published on its website Monday, 17th, Dec. Both Binarytradeplus and Acetradeoptions, which used to operate under the websites of acetradeoptions.com and binarytradeplus.com “do not belong to an

and/or the performance of investment activities, as provided for in Article 5 of Law 87

The financial watchdog made it clear that on on 25.6.2018, it “decided to wholly withdraw the Cyprus Investment Firm authorisation with number CIF 216/13 of the company B.O. 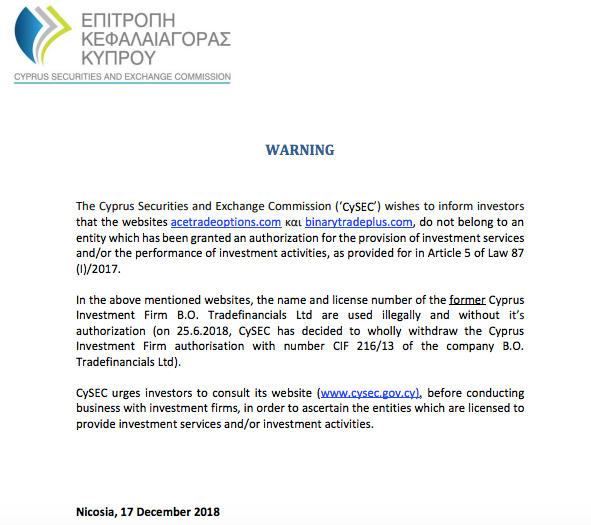 Scam incidents are increasing in the market

The trading venue has been under tougher surveillance over the last year by financial regulators in many countries, with more warnings being issued that inform the public about scamming brokers that operate without authorization.

Banning those operators from continuing their work comes in favour of protecting the customer, who the financial watchdogs emphasise to be a priority, amid ascending trends of exploiting the forex and cryptocurrency markets at the moment.

Fraudsters usually resort to cloning regulated firms, forging the stamp of the regulator, along with the employee in charge who signed the certification for the cloned company, along with making the fake website similar to that regulated one.

The Cypriot regulator also published the last month a statement, in which it warned of fraudster impersonating CySEC officials, claiming that they were assigned the task of collecting fees for settling “fake” compensation claims, for scamming consumers and investors, as AtoZ Markets reported.

The fraudsters who claimed to be the regulator’s representatives used to target regulated companies, to track their clients and conduct a survey on them first for knowing what kind of consumers they are, then they approach them accordingly.

The CySEC confirmed in its statement that it had “no authority or jurisdiction to collect fees for any purpose from individual investors, nor does it have authority to appoint anyone to do so on its behalf. It does not authorise, verify, monitor, or is in any way involved in class actions, compensation schemes, payments between natural or legal entities or any public or private agencies.”