27 September, 2019 | AtoZ Markets – The Cyprus Securities and Exchange Commission has today issued a Policy statement. It has made permanent the regulations introduced by the European Securities and Markets Authority (ESMA) last August.

The Cypriot regulator said that leverage is now restricted, with highs of 30:1 on major currency pairs. And it is the lows of 2:1 for cryptocurrencies on the opening of a position by a retail client. 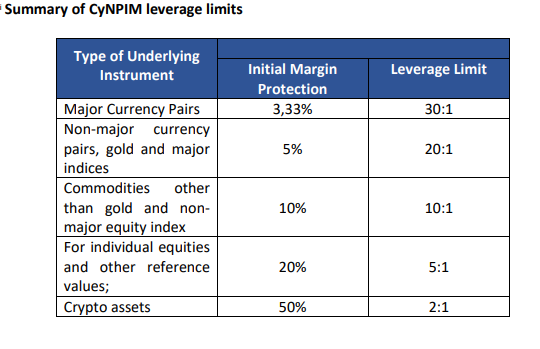 Brokers will also have to put negative balance protection measures in place and won’t be allowed to provide welcome bonuses to market their services. The move to adopt ESMA’s measures marks something of a shift on the part of CySEC.

On May 30, CySEC released a consultation paper. It was looking to adopt a different set of regulations than those put forward by ESMA. Certain marketing practices restricted. Those regulations would have allowed retail clients to trade with 50:1 leverage if they met a certain set of criteria.

However, in the statement it released today, CySEC said that it has abandoned this plan. The regulator wrote:

“Further to Consultation Paper (CP-02-2019) on 30 May 2019 consulted interested parties on the proposals for CyNPIMs, and for the avoidance of doubt. CySEC has not imposed a risk-based approach to leverage limits.”

As a result, CySEC’s rules are almost similar to that of ESMA. The only difference between the two sets of regulations is the standardized risk warnings.

New Cypriot firms that have less than twelve months of retail client trading data will have to put a block of text on their websites. It stated that “the vast majority of retail client accounts lose money when trading in CFDs.

On the other hand, ESMA states that brokers must state the percentage of traders who lose money when using their services. Something that Cypriot firms with over a year of client trading data now requires to do.

Tags CFD CySEC ESMA ESMA CFDs forex brokers
Forex Crypto
Top 5 Forex Brokers
Top 5 Crypto Exchanges
Your subscription could not be saved. Please try again.
Thank you for subscribing. You will be the first to receive all the latest news, updates, and exclusive advice from the AtoZ Markets experts.
Everyone is reading
Is Forex Trading Halal or Haram in Islam?
Top 5 Forex MT5 Indicators for 2021 you should try
Top 5 cryptocurrencies 2021 | Best Cryptocurrency To Invest
close ×