The Chinese Yuan is one of the newcomers in the Foreign exchange trading, as its rate was fixed by the government since early 90’s and have only recently started getting some impact from the market moves. Before we begin analyzing USDCNY currency pair, it is necessary to mention that there is almost no speculation going on and CNY price mostly depends on the amount of the goods and services purchased in China by the foreign countries and the policies of the Chinese government.

For years Chinese monetary policy was to keep Yuan as low as possible to bootstrap its trade with the foreign countries. While Yuan could still buy enough in China, CNY at 8.25 was also a very good deal for the American and European exporters. However, the changes have started in 2005 when the Yuan started to grow and resulted in the USDCNY rate to be around 6.82 by the middle of 2008. 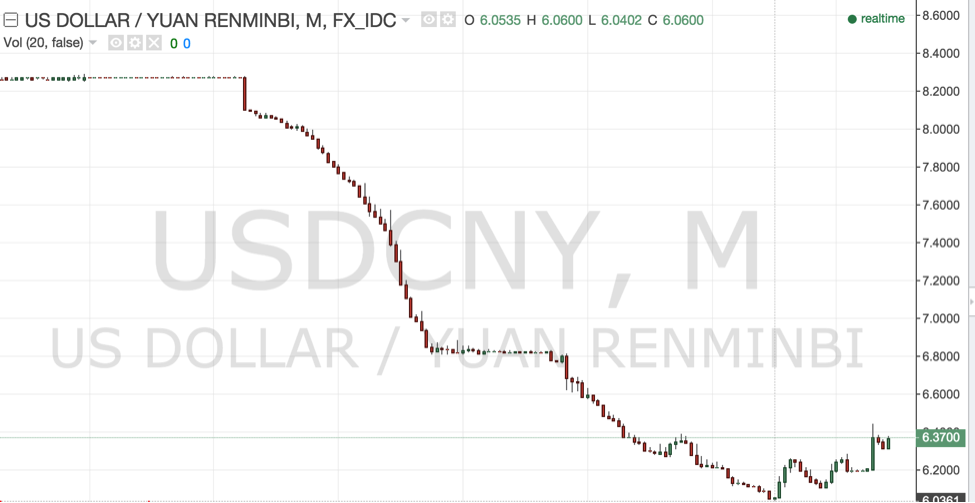 A flat trend continued for another 2 years and in August 2010 Yuan has continued its growth again. The year 2014 has started with 1 USD being equal to 6.05 Yuans, yet after this a little decline has begun. By now Yuan has come back to its July’s 2012 rate as is equal to 6.37.

What were the major events that caused the decline in Yuan’s value and what is there to come in 2016? Let’s find out below.

So what are the current issues in USDCNY? Interestingly, the first two quarters of USDCNY were rather calm with no major market moves. Even though there were a few days with some volatility, it was rather fractional compared to what has happened on the 11th and 12th of August.

Such a large spike was mainly a result of the Chinese government interference to the Forex trading, as the Yuan is largely connected to the US dollar and without the help from the government it would appreciate even more. While for many countries a stronger currency is a desired option, an appreciating Yuan could be a deadly move for the Chinese economy. Considering that the competitors of China, such as Korea or Japan, would become cheaper for the foreign buyers.

This tells us that the Chinese government has clearly states that it is primarily interested to keep USDCNY rate at the desired level of 6.3 - 6.5 and that a lower rate is just not acceptable. Such an aggressive strive for stabilisation also shows that China wants to show that the Yuan can certainly be a dominant currency within the next few years.