The serious security breach in January 2019 cost New Zealand based crypto exchange Cryptopia multi-million dollars in losses. After that, the company has once again shut down its services after an 8-hour downtime. Does it mean that Cryptopia shuts down forever?

15 May, 2019 | AtoZ Markets – The Cryptopia’s team confirmed the hack in January 2019. The security breach resulted in significant financial damages. The company officials later confirmed that over 9% of their total holdings were stolen in the process.

The report published by the Blockchain’s data analytics firm Elementus showed that Cryptopia hacking was not an isolated event. That was a few weeks later, after the hack. According to Elementus, Cryptopia’s platform experienced continuous attack, and hackers regained control of the exchange, withdrawing funds from about 17,000 wallets.

As the cybersecurity experts assumed, the hackers stole the funds, which mostly mined tokens deposited directly to exchange from different pools. This explains why, despite the attacks, the addresses of the hacked wallet kept a constant flow of tokens. A few days after the attack, the hackers attempted to deposit stolen funds into Binance, but the exchange froze them.

Cryptopia Shuts Down after Reopening Deposits and Withdrawals in April

Cryptopia made a second attempt to regain its reputation and resumed its service one month ago. Reopened withdrawals and deposits allowed users to claim a certain percentage of their balances. The New Zealand-based company has announced on its Twitter account that it is starting to list 40 trade pairs, which it “quantifies as safe.”

After this Tweet, an email issued by the Cryptopia office indicated that it would place the Cryptopia Loss Marker (CLM) in place of the missing funds. The exchange supposed to use CLM as a means to assess the loss of an individual in the New Zealand dollar (NZD) after hacking.

Cryptopia also confirmed that it would start giving way to its customers through fair logistics.

However, today, after an 8-hour downtime, the New Zealand exchange posted a message indicating that the company was unable “to reduce cost and return the business to profitability.” It was decided to appoint David Ruscoe and Russell Moore from Grant Thornton New Zealand as Cryptopia liquidators. 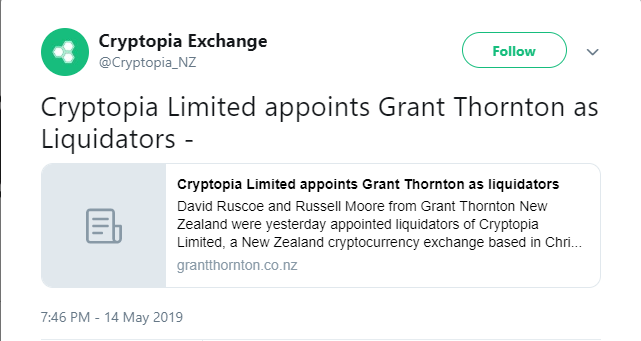 It seems that the company did not manage to recover. As per Cryptopia’s message, liquidators will work with the exchange to secure assets and return as much of them as possible to affected users. Such an investigation will take months to complete.

Grant Thornton will contact Cryptopia users for further steps. That is most likely via email. While the Cryptopia liquidation process and investigations take place, trading on the exchange is not available.

Jack Dorsey Talks About Plans for Integrating Bitcoin on Twitter
Forex Crypto
Top 5 Forex Brokers
Top 5 Crypto Exchanges
Your subscription could not be saved. Please try again.
Thank you for subscribing. You will be the first to receive all the latest news, updates, and exclusive advice from the AtoZ Markets experts.
Everyone is reading
Is Forex Trading Illegal in India? Can Indians Trade Forex Legally?
XRP Skyrockets After Ripple’s ODL Announcement
Ripple Found Support Around $0.62 Price Area - Will Recover Upside?
close ×