The analysts from the blockchain company CoinFirm reported that Cryptopia hackers started to move $16 million stolen funds to several wallets. It was after the New Zealand exchange Cryptopia announced its liquidation.

CryptoFirm provides anti-money laundering and know your customer (KYC) services for virtual currencies and blockchain actors. It suggests that the hackers are preparing to pull cash out via the exchange mentioned above. Grant Blaisdell is a CryptoFirm official. He reports that one of the Cryptopia hackers has already moved “30,790 ETH (~$7.67M) from the last address (red) to the new one. (yellow)” 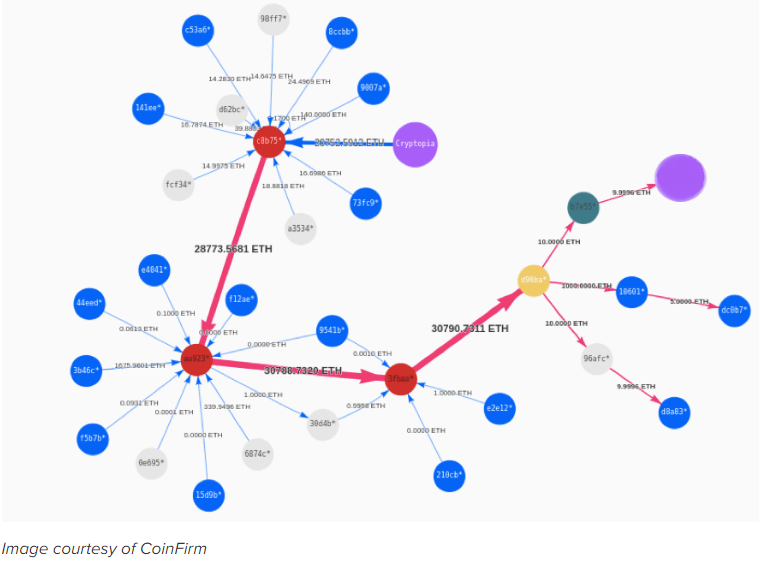 According to Blaisdell, it happened on 20 May, 2019, at 01:43:57 AM +UTC, and the previous address still has got 29,770 ETH.” Two other addresses, as the CryptoFirm represents mentioned, received a combined 1010 ETH. Another 10 ETH landed in what appears to be a Huobi deposit address and then went to a Huobi hot wallet. As of about 2 pm EST on 20 May, another 30,788 ETH moved into a new set of wallets, the blockchain company reported.

Cryptopia Announces about Its Liquidation

Cryptopia’s team confirmed the hack in January 2019. The attack resulted in significant financial damages as over 9% of Cryptopia’s total holdings were stolen. Blockchain’s data analytics firm Elements later reported that Cryptopia’s platform experienced a continuous attack. And hackers regained control of the exchange, withdrawing funds from about 17,000 wallets.

The global cryptocurrency exchange Binance has frozen some of the funds that were stolen from Cryptopia. But it did not help the company to recover. Cryptopia also made a second attempt to regain its reputation and resumed its service in April. However, on 15 May, after an 8-hour downtime, the New Zealand exchange made an announcement. The company decided to appoint David Ruscoe and Russell Moore from Grant Thornton New Zealand as Cryptopia liquidators.

It seems that the $16 million stolen funds are not going to stay in its current address for long. But it remains unclear what exactly is happening to this ether migration, detected by the CoinFirm, as it moves from wallet to wallet.