December 17, AtoZ Markets - Cryptojacking is a secret use of another person’s computing device for the cryptocurrency mining. According to the recent research conducted by the cybersecurity firm Kaspersky Lab, it has become the biggest cyber threat in many regions of the world including the Middle East, Turkey, Africa, Afghanistan, and Ethiopia.

The report of Kaspersky’s research outlined that crypto mining attacks have risen from 3.5 million in 2017 to 13 million, almost fourfold in the region this year. The firm also noted that crypto jacking incidents are “likely to continue given the increased use of digital currencies.” Kaspersky Lab experts explained that the reason for the spread of such hacking malware is that people " do not really want to pay a ransom “ as they would have to in case of the ransomware. This is another type of malicious software from cryptovirology when hackers threaten to publish the victim's data or perpetually block access to their device unless a ransom is paid. Fabio Assolini, Kaspersky’s Senior Security Researcher added that cryptojacking

is becoming increasingly popular because it is “less noticeable” than ransomware. The cybersecurity analysts outlined, that whether a person is a PC or smartphone user he can become a target of unauthorized miners. In a period from the 2016-2017 term to the 2017-2018 duration, the number of this kind of cyber attacks increased by 9.5 percent. However, as the specialists stated, this kind of malware has not been global. This year it registered a decrease by 15 percent in Zambia and 11 percent in Uzbekistan, according to the cybersecurity firm. Kaspersky Lab experts warn users that miners will keep spreading across the globe, attracting more people.

It was reported recently, in one of the U.S. outlets, that users of the video game Fortnite have been targeted by a malware that steals Bitcoin (BTC) wallet addresses. Unfortunately, not only individual hackers resort to such actions in search of financial gain. According to the Chinese cybersecurity company, North Korean hackers have stolen cryptocurrency from private individuals by breaking into cryptocurrency exchanges. Kaspersky Lab the Moscow-based cyber security firm revealed, that cybercriminals use malware programs to gain access to users’ PCs in order to mine digital currencies, particularly privacy-focused coin monero (XMR). 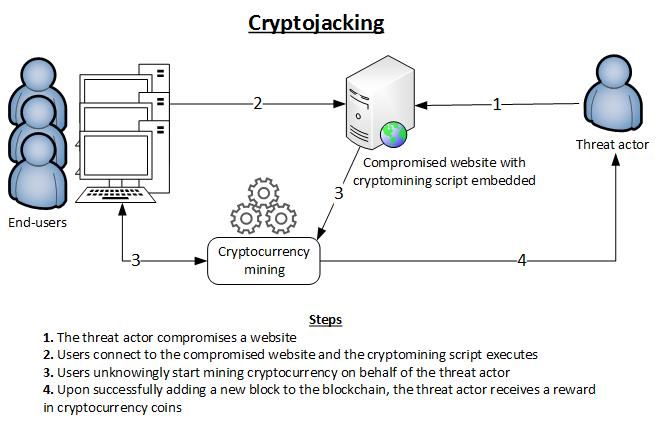 According to whitepaper authored by Cyber Threat Alliance, the majority of hackers mine Monero as the computing resources required for this virtual currency are less compared to other currencies. Such malware usually runs as a background process on people’s computers, tablets or mobile phones without them noticing. These malicious scripts slowing down the device's work as it uses a lot of CPU power. In some cases, PC may be permanently damaged due to an overload on their processor. As a result, such device malfunctions as sluggish or unusually slow response or an increased processor usage might work as an indication of the malware. Overheating of the device can also be caused due to crypto jacking.

Tags Bitcoin cybersecurity hackers Malware
Forex Crypto
Top 5 Forex Brokers
Top 5 Crypto Exchanges
Your subscription could not be saved. Please try again.
Thank you for subscribing. You will be the first to receive all the latest news, updates, and exclusive advice from the AtoZ Markets experts.
Everyone is reading
Is Forex Trading Halal or Haram in Islam?
Top 5 cryptocurrencies 2021 | Best Cryptocurrency To Invest
How to Setup Monero Mining in 2021?
close ×